Latino Moms and Babies : at the center of campaigns for an accurate Count in Census 2020 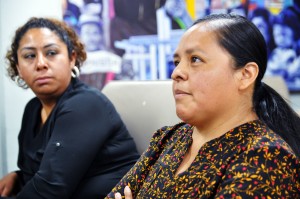 Janet Mendez and Angeles Rosales, two Los Angeles immigrant moms whose small children were missed in the 2010 Census but who now say they will participate in getting others to count in their neighborhoods (Photo: Tessie Borden)

Given the high risk of undercount, activists are gearing up to work with this vulnerable population. And many are moms themselves.

Eugenia G., 18, lives with her mother, brother, and aunt in a two-bedroom apartment in Cypress Park, just a few miles from downtown Los Angeles. Her son Oliver is 1 year old, and although the young woman didn’t continue studying when she became pregnant in high school, she hopes that her little one will be able to graduate.

“I had to quit, but I hope that this sacrifice will be a good thing for my son,” she explains.

Though the idea of filling out a Census questionnaire makes her nervous, the other day she heard in the news that a local immigrant relief organization was asking for trust and participation.

“I honestly don’t know what it’s all about,” said Eugenia, who didn’t want her last name used for this piece or to pose for photos. “But if they tell me it’s about my son getting a good education in the future, I´ll do it.”

Eugenia and Oliver are likely to need a lot of support: medical care for both (Medical, Healthy Families), SNAP (formerly food stamps), Head Start pre-school programs, schooling for the child when the time comes.

They are also, however, among the families most at risk of being overlooked in the 2020 Census, the decennial exercise in which the U.S. government counts every person living within the country. The resulting numbers determine how much federal funding each community will get.

In the  2010 Census, an estimated 2 million of the youngest children like Oliver (under the age of 5) were not counted. This is the hardest age group to count, according to the experts.

Latinos are particularly vulnerable. According to the National Association of Latino Elected Officials, NALEO, about 36% of the children overlooked in the last Census were Latino, even though they are only 26% of the population. Many of the missed children live in the country’s most populous counties, especially in California. In Los Angeles County alone, 47,000 young children were not counted.

The reasons are diverse.

“A complex family structure where there are several families in the same household is an important factor,” explained Professor Edward Flores, a sociologist at the University of California at Merced.

“When I was newly married, I lived at my parents’ house with my wife before having my twins. It was easy to imagine my parents not including us in the Census because it wasn’t our home,” explains the professor.

Census studies indicate that there is confusion when it comes to filling out the Census. “People don’t know that they have to list every person living in their household.”

The particular vulnerability of young children to not be counted often has to do with their parents’ youth, adds Flores.

as stable as they would be later,” he said.

Confusion also occurs in multi-generational homes, and in ones where unmarried couples or people who are not family or are distant relatives reside.  Latino, African-American and Native American children are more likely to live in this type of home than white children.

Los Angeles neighborhoods with traditionally high undercounts are also those with the highest proportion of young children, according to a study by the Public Policy Institute Research.

East and South Los Angeles, as well as Lancaster and Palmdale, have large concentrations of young children. In these places, the little ones may comprise more than 10% of the neighborhood, compared to only 7% in all of California.

The next Census is a year away, but already there is alarm in California, and in Los Angeles in particular, that the undercount of small children could be particularly serious due to a variety of factors, including the minority communities’ fear and mistrust of the government.

In addition to a projected undercount of children, Los Angeles County also is considered the “hardest county to count” in the country, as is the city of Los Angeles.

Maria Garcia is the 2020 Census director for Los Angeles Mayor Eric Garcetti, explained in an interview that both the city and the county, school districts and about 400 community organizations are involved in efforts to count as many people as possible.

“One of the first things we did was a local update of Census addresses to make sure what they have is accurate. We identified 400,000 addresses for them to add,” Garcia said. “In Los Angeles we have very unique living quarters.”

The Census Bureau this year has one specific committee dedicated to count young children.

LA City’s Garcia shared that federal officials plan, among other things, to “include more language in the questionnaire to inform that babies and children need to be counted.”

The issue is so critical for the outcome in some communities that NGO´s have designed specific campaigns to count children. On April 30, Children’s Day, the National Association of Latino Officials (NALEO) launched “HAZME CONTAR,” focused specifically on including Latino children up to age 5.

“We are developing many informational resources for parents, such as postcards and pens. We’re going to make charts for schools to talk about the types of families that exist: ‘I live with my grandmother,’  ‘I live with my mom and her friend,’ for example,”  Escobedo said.

Apart from disinformation, fear could be a specially serious problem this time. Census pilot studies found a lot of mistrust in the immigrant community towards the idea of sharing personal information in a government questionnaire, particularly if the citizenship question is added.

“With this particular president, people are very afraid of giving information to the government,” acknowledges Janet Mendez, a Lincoln Heights resident and mother of four. She didn’t participate in the 2010 Census, but now that her children are older and she has DACA protection, she thinks differently.

“I’ve been getting information, and I think it’s too important because of the resources that go into the community,” said Mendez, who previously lived in the almost entirely Latino city of Huntington Park. “I don’t remember anyone knocking on my door to tell me about the Census. But I hope next year will be different.”

The high cost of not counting

The cost of not adequately counting young children in the Census next year could be very high for many localities.

According to Los Angeles County sources, for each person not counted, the local government loses $2,000 per year in federal dollars.

The undercount in 2010 was severe. The projections for 2020 are no less worrisome, potentially aggravated by an environment of fear in the most vulnerable communities, especially those of minorities and immigrants.

Many families with young children are immigrants and fear the misuse of the information, even though there are laws that guarantee their confidentiality.

“We deserve to be part of the Census,” said Angelica Salas, executive director of the Coalition for Humane Immigrant Rights (CHIRLA). “There is more than $700 billion in health, housing and other programs that depend on it, and if they don’t know we exist, local governments won’t get the money to serve our community.”

The simple information about how the Census relates to things like education and health makes some moms respond positively.

Ángeles Rosales, a mother from Morelos, Cuernavaca, confesses that she did not participate in the 2010 Census even though she already lived in Los Angeles and had two small children. Now she has three, two of them teenagers.

“The truth is I don’t remember if I participated.  I don´t think so. I think we have many problems to take care of, we work a lot and we may not realize what’s going on around us,” explains Rosales, who lives in South Central Los Angeles, the area of the city with the highest undercount in the Census.

Rosales now volunteers with CHIRLA, and does community outreach to inform her community of the organization´s services. She plans to volunteer to raise awareness about next year’s Census.

“Lack of information is the hardest part,” she says. “I identify with many of those families.  I didn’t know what the Census was before I volunteered here but now I know that if we are counted, the resources will come: schools, hospitals. If there is no money, how are we going to have them?”