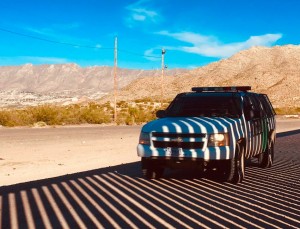 A Border Patrol truck in the shadow of the border wall in Sunland Park, NM, near where the UCP had its camp.

Videos and audio posted by the group and its supporters on social media raise questions about agency’s role.

National and international media crackled this month with reports that the United Constitutional Patriots, an armed, right-wing paramilitary group, was detaining migrants as they crossed from Mexico to the U.S. in southern New Mexico. In an April 18 news release, that state’s ACLU affiliate called the group an “armed fascist military organization” and characterized its detention of migrants as kidnapping. It also publicized a damning video of the paramilitaries in action in the desert, rounding up scores of migrants, including children, and shining bright lights in their faces.

The national media jumped on the story within hours after the ACLU distributed its news release, but according to a YouTube audio post, the group set up its camp almost two months earlier, in late February. By March, its members were openly detaining migrants at the border, with the seeming cooperation of U.S. Border Patrol. The audio recorded by the UCP in early March reveals the Border Patrol stepping in to apprehend migrants after UCP rounded them up, and three videos posted in March and early April show the same thing.

When contacted for this story about the evidence of their apparent cooperation with the militia, U.S. Customs and Border Protection, the federal agency that includes the Border Patrol, sent an official statement saying it “does not endorse or condone private groups or organizations taking enforcement matters into their own hands.”

The United Constitutional Patriots is based in rural northern New Mexico, where the group’s “commander,” Horton, lives. According to the Southern Poverty Law Center’s Hate Watch blog, the UCP is an outgrowth of right-wing paranoia about so-called caravans of Central American migrants.

Rather than seeing these migrants as victims of violence and extreme poverty who are seeking safety in the U.S., the UCP fears them as invaders, according to the group’s own social media. Their posts suggest that the group’s members see it as their patriotic duty to patrol the border with arms to impede illegal migration and save America from destruction. 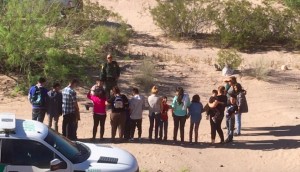 Migrants who have just crossed the border from Mexico into New Mexico near the UCP camp begin the process of requesting asylum on April 19, 2019.

The UCP’s members are lavish enthusiasts of social media. In New Mexico, they have photographed, audio-recorded, and livestreamed much of what they’ve been doing near their desert base camp, a few yards from the border, just south of the New Mexico town of Sunland Park.

The group’s social media suggests that after arriving to the area in late February, it began operations as the United Constitutional Patriots-New Mexico Border Ops. Sunland Park Police Chief Javier Guerra told The Appeal that he got a call around that time from the Border Patrol, informing him that a militia was operating near the border. Guerra visited the group’s camp and told its members they could not detain people or do any other kind of law enforcement. The group said it would not, according to Guerra. He said he did not know it was detaining people until the national news broke.

But long before that, the paramilitaries were contravening what they’d told the police chief. They began to post material recording their detentions and handovers of migrants to the Border Patrol.

On his March 8 online radio show, United Constitutional Patriots leader Horton invited the audience to follow the process with migrants whom a female militia member had just detained.

“Call it in,” a woman’s voice is heard saying on the show.

“OK,” Horton responds. “Hang on a minute, folks. I have to call it in to the Border Patrol. You are seeing firsthand how this works.”

Horton then is heard dialing a phone number. A male voice answers.

“Yes, sir,” Horton says. We have a group of illegals we just caught. … So we need somebody to come out and take them off our hands, sir.”

“Okie-dokie, I appreciate it. Thank you, sir.”

“OK, folks,” Horton tells his audience. “Now you just witnessed what we do and how we do it. They went out, they caught them, they’re videoing it right now.”

By April, the Facebook page of Jim Benvie, UCP New Mexico Border Ops’s spokesperson, and the page of Debbie Farnsworth Collins, who also appears to be an active member of the group, were clotted with videos that feature men in camouflage clothing, carrying guns and other weapons and with their faces masked.

In multiple videos, three of which are described in detail below, the militia members confront migrants, order them to march and to sit, and stand over them until the Border Patrol arrives. Benvie and armed men in camouflage then remain on the scene with Border Patrol agents as they begin to process the migrants. Meanwhile, Benvie offers livestreamed commentary about the danger to America of an immigrant invasion. Benvie confirmed to The Appeal and to the Washington Post that he is a member of UCP. He said he shot the videos and published them on his Facebook page.

In one video, after Benvie spots a group of migrants climbing a hill, he says that he wants to “cut these ones off.” He yells “Alto!” (Spanish for “stop!”) as he runs after the frightened people, including a screaming, stumbling woman with a suitcase. Border Patrol agents arrive, and Benvie makes clear to them that he has been pursuing the migrants. “I didn’t want to chase too hard,” he says.

Another Benvie video shows a man wearing camouflage armed with an object that looks like a knife or billy club. Benvie is with this man and two others in similar attire. One helps Benvie harass a migrant man and woman they have just detained. They suspect that another person is hiding, and Benvie speculates about how they could flush him out.

“If we shot on the hill, it would be an international crisis,” he says. “It would save us some time, though, wouldn’t it?” A Border Patrol agent arrives, and Benvie says, “We got two here for you, bud.” “Did they come up the road?” the agent asks. “We chased ’em on the mountain,” Benvie answers.

The most chilling Benvie video, posted in early April, shows dozens of migrants on the ground. When the video begins, one man has his hands up, and the Border Patrol is on site, but the militia does not leave. Benvie livestreams while talking with other militia members who are present, describing the people in the video to viewers as “just one group we got control of.”

As a Border Patrol agent stands at the edge of the group, a militia member shines a flashlight into the eyes of the migrants, who include men, women, and small children. More adults start to hold up their hands, and a woman begins sobbing loudly. Soon, all the adults have their hands up, including a woman who holds a baby bottle in one hand.

The sobbing gets louder. “What are they crying about?” asks a person who seems to be part of the militia. “Did they think they were going to get through?”

“Why are they sitting there with their hands up?” another person asks. His question is followed by chuckling.

The Border Patrol agent does not tell the UCP to leave.

In an April 22 letter, three members of Congress, two from New Mexico and one from Texas, urged the FBI to look into the activities of militia groups along the border and “whether the groups have been assisted by U.S. Customs and Border Protection in any manner.” The FBI could not be reached for comment by press time.

The Appeal asked U.S. Customs and Border Protection for a response to evidence that Border Patrol agents knew for weeks what the paramilitaries were doing and went along with it. The Appeal also asked whether any of the agents would be disciplined.

CBP responded only with the boilerplate about not condoning civilians acting as law enforcement agents. “Interference by civilians in law enforcement matters could have public safety and legal consequences for all parties involved,” a spokesperson wrote.

On April 23, five days after the national media began reporting on the paramilitaries in New Mexico, the United Constitutional Patriots were evicted from their camp. It turned out that they’d been trespassing on private land.

That land is bleak and scrubby, bounded by train tracks, lumbering freight trains, and a poverty-stricken neighborhood just over the border in Mexico, where kids play outside and buses drop off men, women, teens, children, and babies who are preparing to cross the international line and seek asylum.

The Appeal visited the camp before the eviction. The paramilitaries gathered there declined to be interviewed and said that photography of their camp and members was not allowed

Meanwhile, over the hill, a group of 18 women and children suddenly appeared. They walked past an ear-splitting freight train, scrambled over the tracks, and stood at attention before a Border Patrol agent.

“You are in the United States now,” he said, as a Border Patrol truck pulled up.