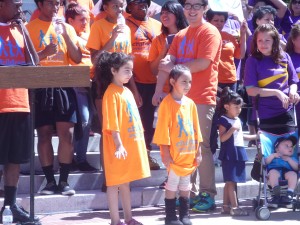 This week a bill in California that seeks to stop wage theft moved forward, as it passed a state senate committee. Thousands of workers in the state are victims of employers who refuse to pay them minimum wage or overtime. The bill has the support of a wide coalition of workers, community groups, and some businesses. Fernando Andrés Torres reports that a group of young people also traveled to the state capitol to support the bill, because of the protections it would give to their parents.

Voices of youth singing and chanting…

These are the voices of more than 30 young Californians who traveled to Sacramento to attend a hearing for the Fair Day’s Pay Law and share with lawmakers how wage theft has affected their families and them personally.

Twenty-year-old Leticia Vélez’s mother is a janitor in Los Angeles. 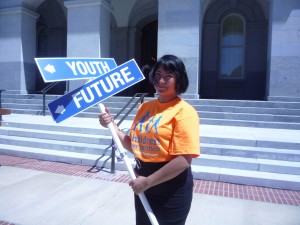 Leticia Vélez says her mother has been the victim of wage theft. Photo: Fernando Andrés Torres.

“She is always struggling because she tells me, ‘I got paid, but they didn’t pay me all my hours. They owe me three days worth of wages.’ And sometimes months go by and she doesn’t get paid. My mom is a single mom of three. I’m the oldest. So you can just imagine how two days, or even one day that she doesn’t get paid affect us with the rent and the bills,” says Vélez.

A young boy named James read a short poem that ends, “It’s not fair that my parents don’t make money working, laboring. So when you steal from them, you are also stealing from me.”

James, Leticia and the other youth belong the group Children Over Politics, a project of the Service Employees International Union.

“This law is going to be very effective, because we see that more than 80% of workers are working about 12 or 14 hours, thinking they will get overtime, but when they go to get their check, they only see eight hours, and it’s not even the wage they are supposed to be paid,” says Alejandra Valles, who works with the union. 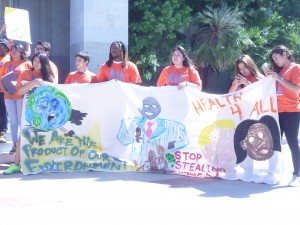 According to a report from the U.S. Department of Labor, more than 300,000 workers in California receive less than minimum wage at a cost of up to 1.5 billion dollars every year.  The most affected include women workers, inmigrants, Latinos, and African-Americans. Valles says these would also benefit most from the law.

“This law is going to help enforce, when a worker makes a claim against an employer, that employer would have to respond and would ahve to pay that worker what they owe, or they will have problems here in California,” says Valles.

Among other things, the bill would give the California Labor Comissioner the tools to demand that companies pay a bond of $150,000 if they have been ordered to pay backwages and still have not.

At the hearing, the State Senate Judicial Committee voted 7 to 3 to pass the bill against wage theft. Now, it goes to the Fiscal Committee, and then to both chambers and the governor’s desk before becoming law. 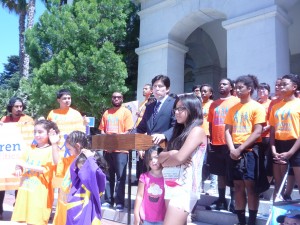 After the vote, joy reigned in the halls of the legislature and outside the capitol building.

“I’m happy! I’m here in the capitol, fighting for the rights of working people!” said Senate President Pro Tempore Kevin De León. “We are going to keep fighting until this bill becomes law and goes into effect in 2016.”

The young people say they are also going to keep lobbying until the bill becomes law to protect their parents’ hard-earned wages.