“Our lives are on the line.” Will Young Latino Voters in California get out to vote?

“Politics was always to me like a different world. It didn’t really matter to me,” she said. “This year, I just felt strong and brave.”

Martinez, is a U.S. citizen who identifies as a queer Latina, she said issues like trans rights and marriage equality for same-sex couples, fueled her desire to vote this year.

“It didn’t matter until I saw my community, and my friends, and my family just being dangled in the air like little puppets,” she said. “It became personal for me.”

She is not alone.

A recent poll by the Latino Community Foundation and Latino Decisions asked 1,202 registered Latino voters about their plans to vote, 73 percent said they were certain they would vote in November. An overwhelming majority, 86 percent, of young Latino voters in the survey said they support the protests related to the death of George Floyd, who was killed by a white police officer. 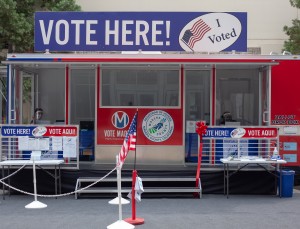 Many worry about the response to the coronavirus pandemic by the government, as well as about the legal rights and incidents of discrimination against immigrants in their family and community.

In addition to climate change, immigrant rights is the issue that Petra Recendiz, 18, from Coachella, may have in mind when she votes for the first time during this year’s presidential election.

“I have friends who don’t have papers,” she said in Spanish. “The current president is a little racist and I think a different president could make things better for all of us.”

However, since young voters traditionally have voted at lower rates than the rest of the electorate, it’s unclear how big the voter turnout will be among young Latinos in California. Out of the young people polled, ages 18 to 25, only 56 percent said that they were certain to vote in November.

“What we’re seeing in the state is that this attitude, this determination to vote, the truth is it appears to have lessened for November,” said David Ayón, national policy expert and a Senior Strategist and Advisor for Latino Decisions, an opinion research agency.

Ayón, who collaborated in the survey, said a similar poll taken ahead of the Super Tuesday primaries showed that many more Latinos were certain to vote, 76 percent. The difference was greater among young Latino voters: 66 percent had said they were certain to vote during the primary season.

“They were more excited,” Ayón said.

On the low levels of participation among young voters, Ayón points to the traditional vote model. It predicts the likelihood of someone voting on a person’s proximity on factors like age, income, and educational level, all of which are less attributable in young voters.

Many don’t feel included in the election process and get discouraged. That happened to Sarah Martínez. “Last presidential term, I just was so focused on the thought that my vote doesn’t really matter,” Martinez said. Her feelings changed after she saw the 2016 presidential election results. “I came across an article about how there was this massive number of people who didn’t vote and they were mostly younger.”

But this year, Martinez is determined to get the vote out.

“This is a serious thing,” she said. “Our lives are on the line.” 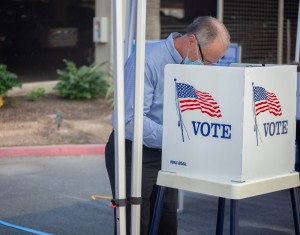 Madera County Supervisor, Robert L Poythress, votes at the mobile voting unit on the day of its launch. Photo by Maria Esquinca.

Last year she never talked about voting with her acquaintances. This year she’s eagerly engaging friends and family in those conversations.

“Now, when I tell you any time I see somebody, I’m like, ‘did you do the census? Are you registered to vote? Do you need help?’” she says. “I’ve never had so many conversations about voting.”

Part of that change was also due to her job. Last year, Martinez started working for Communities for a New California, a nonprofit. “It opened up my eyes,” Martinez said. “I was able to soak in so much information in a way that I could digest.”

Recendiz, had a similar experience. She also works for CNC as a phone banker. It’s her job to inform people about voter registration, mail-in ballots and in-person voting, conversations she’s bringing to her home.

“I have older siblings who have never voted and they are U.S. citizens,” she said in Spanish. “I started giving them that information.”

She helped her 21-year-old sister register to vote, “and she’s going to vote,” Recendiz said.

Recendiz said she noticed the same level of enthusiasm amongst her friends. “I see a lot of them amplifying their voice so that others vote,” she said.

In the U.S., more than 45 million people have already cast a vote. Some states and counties across the country have shattered their previous early voting records. In California more than seven million people have voted by mail according to the U.S. Elections Project, which collects voting data.

“I have no doubt that there will be a great record in voter turnout in terms of early voting,” said Ayón.

Across California’s Central Valley, county leaders are taking steps to facilitate the vote despite challenges imposed by the pandemic.

In Madera County, the board of supervisors approved the purchase of a mobile voting unit.

Rebecca Martinez, county clerk-recorder and registrar of voters for Madera County, said the goal of the mobile unit is to provide services to people closer to where they live. 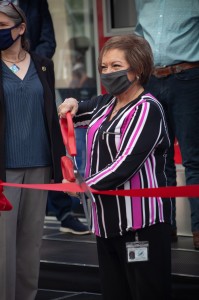 “I think every registrar in the state of California is trying to find more ways to serve the voting public and be more accessible out in the community, and so we did, too,” said Rebecca Martinez, county clerk-recorder and registrar of voters for Madera County.

Martinez said interest from voters in approaching the mobile unit has been low. In its first week, 102 people voted in-person at the unit,  she said by email.

However, Martinez said she expects voter turnout to pick up and be higher during this presidential election because it will be the first year under California Voter’s Choice Act, a new law that expands early voting and makes voting in person more convenient and easier.

“You don’t have traditional polling locations. You have vote centers now, and so it’s different. Everybody gets a ballot in the mail,” Martinez said at the ribbon-cutting ceremony for the mobile voting unit. “I expect that this election, it’ll be greater than that [voter turnout from the last presidential election] I don’t know how much greater, but it’ll be greater.”

The purchase of the mobile voting unit was inspired by similar efforts in Los Angeles and Orange County.

“It’s been something I’ve wanted for a long time,” Martinez said.

While other counties in the Central Valley, including Fresno and Mariposa, have adopted the new system of the Voter’s Choice Act, none has launched voting mobile units, according to Martinez.

In Fresno, there are 66 secure ballot drop box locations throughout the county. Over 166,000 people have already voted by mail, exceeding the vote by mail turnout of the previous presidential election.

“Approximately 162,000 ballots were returned by mail in 2016,” said Fresno County Clerk and Registrar of Voters, Brandi Orth, by email.

For her part, Sarah Martinez said she will keep urging people to vote.

“I just feel energized now and I’m excited to vote this time around,” she said. “I just feel like enough is enough and I’m going to round up as many people as I can that have never voted just like me to go out there and do it.”