From the Fields to Top College: One Family’s Story

In the struggling farmworking town of Parlier, in California’s San Joaquin Valley, the Ramirez family stands out. All four Ramirez siblings attended the prestigious University of California at Berkeley. That’s no small accomplishment for a farm working family living in one of the poorest cities in California, and one of the least educated in the country, once described as an overgrown farm labor camp. Today, the oldest Ramirez sister is an award-winning landscape architect, and her three siblings are teachers, educating the next generation. Zaidee Stavely visited two of the sisters, who live near their hometown, to see how the Ramirez family beat the odds. This report was produced by Radio Bilingüe as part of American Graduate –Let’s Make It Happen! – a public media initiative to address the drop out crisis, supported by the Corporation for Public Broadcasting. 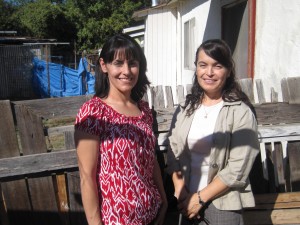 Ángela and Gloria Ramírez outside the apartment where they grew up. Photo: Zaidee Stavely

Gloria Ramirez and her youngest sister Angela step along a gravel driveway to peek over the back fence of their childhood home.

“It looked so much bigger before!,” gasps Gloria.

It was a tiny one-bedroom apartment for a family of six. Their parents slept in the bedroom. The four kids shared the living room.

“We had bunkbeds on one wall. Then my brother had his bed on the other corner of the room,” remembers Gloria. “There was a little space for a TV, and we had a dining table, where we could sit down to eat.”

“For some that would be extreme poverty, but my parents always provided, no matter what.” 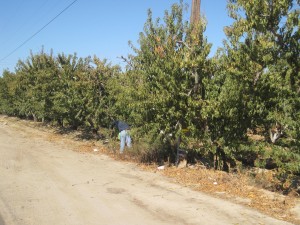 Back in Gloria’s car, the two sisters drive by rows of grape vines and orange trees where their parents worked long hours to provide for the four kids. In a peach orchard, men and women prune and rake branches, whistling as they work. The Ramirez girls remember their father singing in the fields. The kids would pitch in, too, picking grapes in the summer and tying vines in the winter.

“Sometimes the vines were frozen,” remembers Angela. “You wrap them around, and if you’re not quick enough to get your tie, it unwraps and slaps you in the face. And I just remember being out there, crying. You know, the field work was hard, and of course we didn’t like it but it was a way for my parents to show us, look, if you don’t do well in school, this is what you’re going to end up with.”

The Ramírez family fits a pattern of children of immigrants who are top achievers in school, says Dr. Patricia Gándara, a research professor in education and co-director of The Civil Rights Project at UCLA.

Gándara interviewed dozens of sons and daughters of Mexican immigrant laborers, with an average education of third grade, whose children, nevertheless, earned doctorates from prestigious universities.

“These are people who came to this country oftentimes in really, really harsh circumstances because they desperately wanted opportunity and they convey that to their kids. You know, this is your chance. The kids oftentimes will say, I had to work hard, because I know what my parents have gone through.” 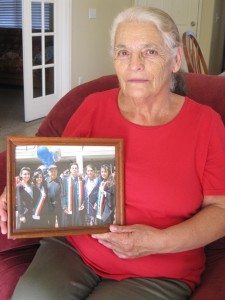 Lucila Ramírez holds a picture of her family on the day three of her children graduated from UC Berkeley, Fabián and María with a bachelor’s degree, and Gloria with a master’s degree. Photo: Zaidee Stavely

In addition to that work ethic and sense of optimism, the Ramirez kids also had a strong foundation in reading and writing in Spanish. The oldest three attended school in Tijuana before immigrating to the U.S. Even Angela, the youngest, learned the ABC’s at home from her mother, though Lucila Ramirez went to school in rural Zacatecas, Mexico for only a year and a half.

Mrs. Ramirez says teachers in Parlier were supportive of the entire family. Between shifts at the packing house, she would faithfully attend parent teacher conferences and meetings, walking about a mile to the school, since the family only had one car, and she didn’t know how to drive. That walk was a bit of a metaphor for her saying: upward and onward.

“My mom’s words were always Arriba y Adelante. Even when times got tough and things were hard, she kept encouraging us to always keep pushing,” says Angela. 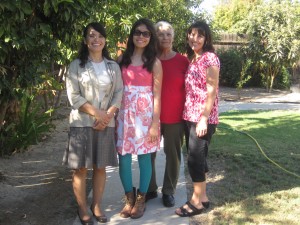 The older siblings also pushed the younger ones to do well. Remember Angela’s memories of the fields? Well she also has other memories.

“I remember my sister Gloria teaching me about science when we were out there. The gases and the solids and the liquids and the…”

“I had a captive audience when we were out in the fields!,” says Gloria. “There wasn’t anything else you could do but listen to me, so it worked!”

One by one, the kids began winning spelling bees, getting top grades, and being singled out by teachers for trips to visit colleges out of town. Gloria was the first.

“When it came down to applying for college, I was told or encouraged by a lot of my teachers to apply to UC campuses,” recalls Gloria. “And our counselor suggested that I apply to the junior college here in Reedley. Because she didn’t think my parents would be willing to let me go to a far away college. That’s what she said. Just in case you don’t get to go, at least there’s something here.… But I had a little bit more faith in my parents. I didn’t apply to the J.C. I applied to several UC campuses and I got into all of them. I liked UC Berkeley.”

Gloria and her brother and sisters all received considerable financial aid to attend UC Berkeley. Dr. Gandara says the combination of skyrocketing tuition and the loss of recruitment and retention programs focused on students of color have pushed most Latinos today to lower their sights to two-year colleges, and most do not graduate. Who may have the key to turn things around? 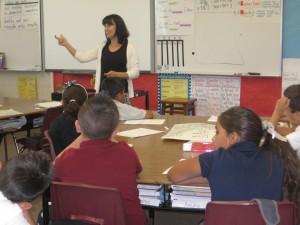 “National data on Latino students shows us that the more they have Latino teachers and counselors, the more likely they are to go to college,” says Dr. Gándara.

Angela Ramirez, whose married name is Santos, now teaches her own third-grade class in Sanger, a farming town neighboring Parlier. On this morning, students are in groups discussing how to solve a math problem. Ms. Santos walks around the room, giving them encouragement. On the walls are the words “Making a World of Difference” and “Be a Hero.”

Angela and Gloria’s sister Maria is a kindergarten teacher, and their brother Fabian teaches high school Spanish in East L.A.

“That just brought such a smile to my face,” says Dr. Gandara. “I don’t think there is a 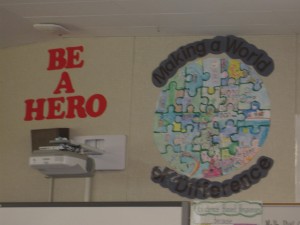 Angela’s classroom walls are covered with encouragement for her students. Photo: Zaidee Stavely

happier part to this story of this family than that. It’s not only giving back, its giving back in the most powerful way that anybody can, teaching the next generation.”

Gloria is not a schoolteacher, but she was called “maestra” by her dad, because she earned a master’s degree in landscape architecture. Her son is now at UC Santa Cruz. And she’s keeping an eye on other youngsters in her hometown:

“We keep going to Parlier because we go to mass there. And I see the story repeating itself. I see people, kids that remind me of me when I was 10, 11, 12. I see parents who remind me of my parents, you know. They were working in the fields, pushing their kids to do good in school, and trying to keep their family together. Knowing that we turned out okay, I have hope for them, too,” she says.

One Response to From the Fields to Top College: One Family’s Story