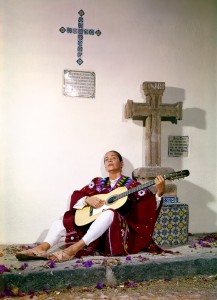 “Chavela.” (Repeat). The film “Chavela: Trailblazer, Rebel, Icon,” showcases the life of the late ranchera singer Chavela Vargas. Born in Costa Rica, Chavela moved at an early age to Mexico City, where during the 1950s broke with Mexican mainstream conventions by dressing in pants, drinking tequila, smoking cigars, and singing rancheras “macha” style. The film also delves into her battle with alcoholism and the breakup with the love of her life. This is a conversation with the film director.

“Vanishing Frontiers.” Donald Trump launched his campaign to the presidency maligning Mexicans as “criminals,” “rapists,” and “job-stealers,” and calling to build a wall. A distinguished policy analyst tells a different story on Mexicans and Mexico. Mexican investments have helped save jobs in the US, and thanks in part to a bridge across the border fence San Diego and Tijuana are becoming a single metropolitan area. These and other compelling stories that paint Mexico as a thriving source of innovation and talent are included in the book “Vanishing Frontiers.”