A Tour of the Mayfair

If you walk through the Mexican Heritage Plaza in the Mayfair neighborhood of San Jose, California, you might hear many different sounds, from Aztec drumming to Hawaiian hula dancing and singing, samba, or hip hop, with hymns in Spanish floating out of the church. In this English language feature, Zaidee Stavely takes you on a tour of this historic neighborhood.

Musician and cultural scholar Russell Rodriguez says one night in the Mexican Heritage Plaza, he heard a couple of the drummers from the Aztec group, Capulli Tonalehqueh…

RODRIGUEZ: “…just kinda showing each other the rhythms, …and then I heard this singing… and I didn’t understand the language, and I thought… is Capulli Tonalehqueh, singing now?”

RODRIGUEZ: “And then I realized it was the Hawaiian class. The way it layered and became so cohesive with the drumming of Calpulli Tonalequeh… it was one of these fantastic moments of how organic the sound is in this space.”

RIVERA PALACIO: When we all get our drums going and we hear the conk, I just think… it feels like home.” 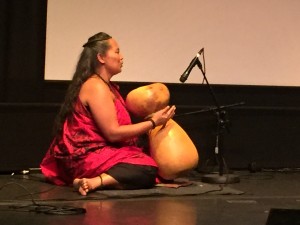 Both of these groups practice at the School for Arts and Culture, established in the Mexican Heritage Plaza about seven years ago, and fast becoming a home for musicians and artists from many different cultures. But long before the school existed, this neighborhood had a history of organizing and rich culture. Rodriguez grew up in East San Jose and he says the neighborhood used to be called Sal Si Puedes, Get Out if You Can.

RODRIGUEZ: “Salsipuedes was the term that was named this area, because it was all dirt, and when it rained, salio un lodal, no?, and it was hard to drive out, or even walk through.”

The Spanish-speaking community here had to organize in the 1950s to get their own church.

That’s Rodriguez singing, with his cousin Federico Zuniga on keyboard. Zuniga plays the organ at the Guadalupe Church. He learned to play from his aunt in Chihuahua, Mexico, and as a young man, he played in dance orchestras on the border. One of the first things he did when he came to San Jose was go buy a used keyboard.

Zuniga says music helped him a lot as an immigrant. 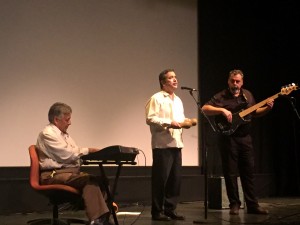 Before getting gigs, he had to work in any job he could get, cooking or catering. Here he’s playing with Charlie Montoya, who is also from the El Paso-Ciudad Juarez border region.

MONTOYA: “Coming from El Paso about thirty years ago, I was blessed to arrive in San Jose where there is a rich cultural and musical history on the Eastside here of mariachi, grupos tropicales, afrocaribbean sound, there’s so much diverse music that you feel at home.”

Today, the old church hall is a historic landmark, because it’s where Cesar Chavez first began doing community organizing. Rodriguez says one of the oldest Mexican folk dance companies in the U.S., Los Lupenos, used to practice in the building.

RODRIGUEZ: “Right before it was converted… it was on blocks. Los Lupenos would dance in it. When you get twenty dancers zapateando, the sound of this building would reverberate… and it was such a beautiful… it’s a beautiful memory for me.”

Son huasteco musician extraordinaire, Artemio Posadas, remembers coming to this neighborhood when he first came from Mexico to California in the 1970s, invited by Los Lupenos. 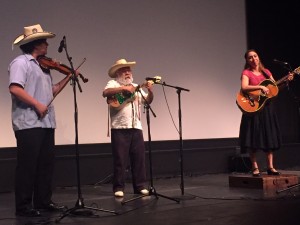 POSADAS: “I remember we used to get together with the Mendoza family here on the corner. They had a big backyard, with a horse and goats. And we would play son huasteco and improvise verses for them, and they were surprised, because apparently that kind of music didn’t exist here before.”

Posadas is now recognized as a National Heritage Fellow, in part because he was one of the first to bring son huasteco, not only to this neighborhood, but to California and the U.S. Here he’s playing in a trio called Bahia Huasteca, with two of his students, Lolis Garcia, and Pablo Quiroz, who is also from San Jose.

Russell Rodriguez says that when the United Farm Workers launched nationwide grape boycotts, the Safeway that used to be in what is now the Mexican Heritage Plaza was a key site for organizing… and for protest music.

RODRIGUEZ: “At these events we would see incredible energy, songs, yelling, gritos. Musicians would always be on the front lines giving the boycotters energy so they could continue to do this work.”

Today other musicians have kept political music alive in the plaza. Demone Carter is an accomplished hip-hop artist. His teenage son Ellis started playing guitar about a year and a half ago.

CARTER: “Our musical tastes are wildly different. And we have debates around that. But when we were tasked with coming up with something collaboratively, it was a fun process to work with my son, exchange ideas.” 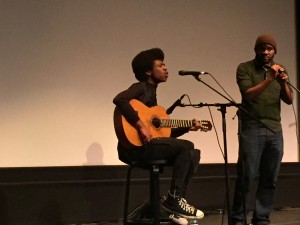 Ellis says coming to regular “cafecito” open mic events at the School for Arts and Culture in the Mayfair neighborhood has given him a sense of family with other musicians. His dad Demone says it’s really important for musicians, and especially young people, to have a place to play. James Biala, who directs the samba group Bloco do Sol, agrees.

BIALA: “‘Cause inevitably what happens is you’re in a place for a little while, and after so long, or maybe even after a few hours, somebody says, ‘Hey I’m trying to sleep!’ or ‘I’m studying for a test!’ or ‘You guys come every week, it drives me crazy!’ We’ve been lucky because we don’t have that here. It’s very comfortable.”

Biala says people from many different backgrounds participate in the samba classes on Saturday mornings.

BIALA: “When we have a very healthy community ensemble, that type of healthy energy makes its way to other parts of the neighborhood. People feel that, and they’re like, Wow, what’s that about?” And so that’s our little way of putting some beauty out.”

Beauty that keeps the Mayfair neighborhood changing, and thriving.

This feature is part of Sounds of Mayfair- Cantos de San Jose, a production of Radio Bilingüe and the Alliance for California Traditional Arts. It’s part of Sounds of California, a radio series that captures the music and voices of the ever-changing California soundscape. Support was provided in part by The California Arts Council, The James Irvine Foundation, and the National Endowment for the Arts.

This entry was posted in Arts & Culture, Songs of Mayfair and tagged cantos de mayfair. Bookmark the permalink.