What is the music of home, when you live on a different continent than your ancestors? And how can we use music to heal the wounds of slavery or migration? A concert in the historic Bayview Opera House in San Francisco explored these questions, by bringing together four music groups with roots on different continents, but who have all made California their home. All of these groups use music to heal… and to connect with other cultures in California. Zaidee Stavely reports this English-language feature.

The voices and drums of the Awon Ohun Omnira Choir reverberate in the Bayview Opera House. 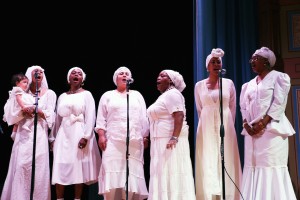 This music is much more than a performance: it’s a connection to their ancestors. And that’s particularly important, because unlike other ethnic groups, African Americans were violently separated from their ancestors’ culture, says Wanda Ravernell, director of Omnira Institute.

The musicians of  Omnira were able to learn something about the culture and traditions of their ancestors, when they learned about the music of the orishas, played in Cuban santería  ceremonies. The music came to Cuba from West Africa. Now, Omnira seeks to connect African-Americans with their ancestors’ spirituality. They also offer this music to families whose loved ones were killed by police. Davina Estrella Ramy says the force of the ancestors heals, because they too suffered unspeakable brutality by the government.

RAMY: “We are prayer warriors, singing warriors, we are trying to bring a bomb or a salve of our songs and dances and ways to our community that have been lost, and it’s a way of bringing closure. Specifically with police violence, the best way to combat is with our ancestors. They’ve all been through this.”

The Awon Ohun Omnira Choir also incorporates songs from The Ring Shout, an African-American tradition from the Georgia Sea Islands. Wanda Ravernell says the tradition has a lot in common with the Cuban ceremonies. 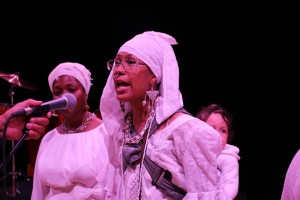 RAVERNELL: “I had read about the Ring Shout all my life. That the source of African-American music was the ring shout. But that was a word. When I saw it, since I had been at ancestor ceremonies by then, I knew exactly what that was. To be able to say to African Americans, there’s this and this, we didn’t lose all of it.”

BERFIN: “The African-Americans really hypnotized me. Because I have always been inspired by what they have done. They were able to change an entire country and its laws.” 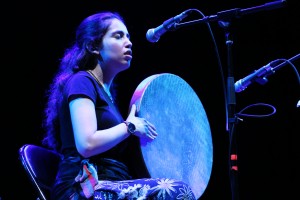 Isik Berfin came from Turkey when she was five years old. Now she is 21. Photo: Sonia Narang / ACTA

This is 21-year-old Isik Berfin, who came to California from Turkey when she was 5.  She and her mother Özden Öztoprak are Zazas, an ethnic group that has suffered violent repression in Turkey. Some of the songs this mother and daughter sing tell of the genocide the Zaza people suffered in Turkey. Berfin says for them, music is a form of freedom of expression.

BERFIN: “In Turkey, because of the regime that’s been going on for years now, the Kurdish or the Zazas are not allowed to speak our language nor sing in our languages. So we started doing music. Although they tried shutting down music radio or television, we still try to do it worldwide.”

Berfin’s mother Özden Öztoprak says it is an honor to be able to sing with her daughter. 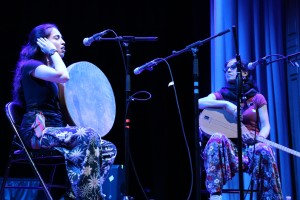 BERFIN: “She said that when I’m with her, she feels whole, and she feels he’s at home and I’m her inspiration to keep on going.”

Berfin says it is beautiful to be able to share their culture freely in the United States. And that’s pretty much what a group of teenagers from Mexico and Central America were looking for, too, when they organized at San Francisco’s Lincoln High School, to get a Latino music band. 18-year-old Beatriz is from Mexico:

BEATRIZ: “We needed something to feel proud so we decided to have a band. At first it was hard because we didn’t have the support, they thought we were just playing.”

It’s pretty clear now that these kids were definitely NOT playing. 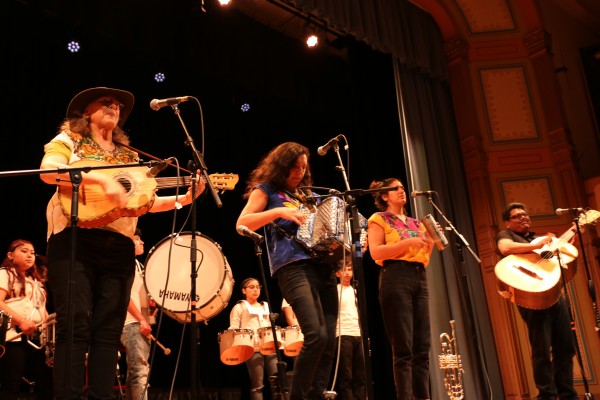 Miguel Govea is the musician the school hired to teach the band class.

GOVEA: “These kids have to grow up really fast, just getting here safely, surviving. They are very mature and once they decide they want to do something, they’re very motivated, they can do pretty much anything.”

The kids in the band are from Guatemala, Honduras, El Salvador and Mexico. Some of them came to the U.S. 10 years ago, others 5 years, 2 years ago… and one just got here three months ago!! All four members of his family also teach in the public schools, so Govea says it felt natural to invite the students to play with his family. 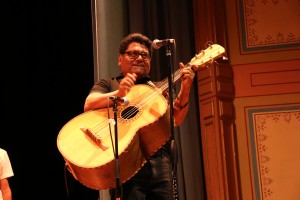 GOVEA: “I’m a musician first and foremost and it’s led me to so many great things, my family and everything else, so if I can share that with them, especially now, because they’re under the gun in a lot of ways, it can make the community feel better, healing.”

The students too say they are proud to be able to share the stage with the Peña-Govea family. Govea and his wife Susan Peña have made music a family tradition. They play together with their two daughters, Cecilia on trumpet and René on accordion.

The last group of the afternoon is also building bridges between generations… and between cultures.  The Au Co Youth Ensemble, made up of children, teenagers and adults, who play ancient instruments from Vietnam. They start with a traditional Vietnamese song, The Rice Drum. 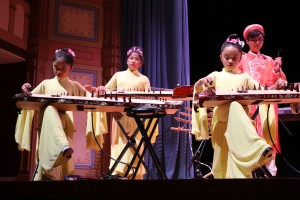 Van Anh Vo is the master artist of the group. She’s won an Emmy for her work, and has played with famous groups like the Kronos Quartet. She says she’s been playing traditional music since she was 6 years old.

VO: “I felt it is very fortunate, almost even like I had a time machine to see what happened in the past. As I am living now in this century, I want to do music that shows the identity of our country, but it has to speak a Californian or American voice”

The Californian voices she incorporates into her work are as diverse as the state’s population. Today, the group plays “La Paloma,” a well-known song in the Latin-American music world.

VO: “When we played, a lot of our friends from other communities started to clap because they didn’t expect that we would include their culture in our own presentation. So that is our message, we are not only sharing, but we also want to get influences from other communities and we influence. We use music to open discussion and learn about each other”

And in that vein, Au Co culminates the concert with an interpretation of a song everybody knows: “Purple Haze.” 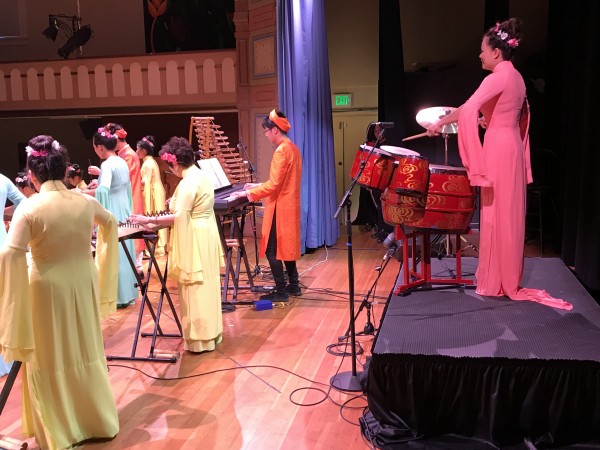 It’s a good metaphor for the concert itself, and for California today. A crowd of children and adults playing a beloved rock song, on instruments invented thousands of years ago on another continent. Music is truly a time machine today, connecting the ancestors to Californians today, with all of their different sounds.