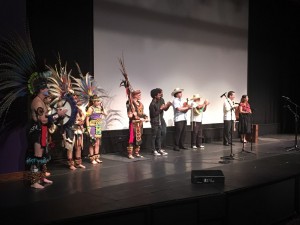 Radio Bilingüe and the Alliance for California Traditional Arts (ACTA) present a concert of East San José, and Mayfair artists and residents. The program, co-hosted by Chelis López and Russell Rodríguez, includes Calpulli Tonalehqueh, a Mexica (Aztec) dance and cultural diffusion group, Artemio Posadas, 2016 National Endowment for the Arts (NEA) National Heritage Fellow, who has been teaching Mexican folk music and dance in the larger Bay Area since 1974, Hālau Nāpuaokamokihanaoha, which since 2007 is committed to carrying the legacy of hula in San José, Demone Carter, a hip-hop artist dedicated to arts and political advocacy in San José, who together with his son Ellis Carter, a young upcoming composer and singer, present an exciting look at contemporary music from San José.

Listen to the first part of the concert:

Listen to the second part of the concert:

This entry was posted in Arts & Culture, Songs of Mayfair and tagged cantos de mayfair. Bookmark the permalink.