The music that filled San Francisco’s Brava Theater during the 6th annual Son Jarocho Festival was clearly from the port of Veracruz on Mexico’s Gulf Coast, with its distinctive jarana, harp, jawbone percussion, and zapateado, the beat kept by dancers on a wooden platform called a tarima. But this music is also Californian now… it’s played up and down the state at fandango parties, marches, and in living rooms. Zaidee Stavely reports that women, especially, are innovating son jarocho on both sides of the border. 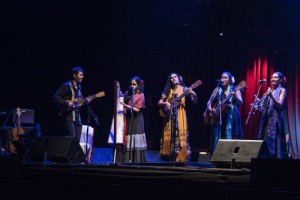 The Brava Theater in San Francisco fills with a cascade of harp and jarana strings. Then the percussion joins in… on a donkey’s jawbone.

CAO ROMERO: “The first interest is to sound like the music that women can do. That we think it is more soft, and different verses. In order to sing verses that are from a girl or woman to a man.”

Son jarocho is captivating and distinct, with a strong Afro-Mexican influence. People now play this music all over the world. But it hasn’t always been that way. Cao Romero grew up in Veracruz and has been playing the harp for most of her life. But she says there didn’t used to be many young people playing traditional music.

CAO ROMERO: “I knew many musicians but they were old people. My friends told me, why do you study harp? There are many recordings already. Why do you waste your time learning harp?”

So she and other son jarocho musicians began trying to interest young people in playing, bringing the rural tradition of fandangos to bigger cities. A fandango is like a big community party focused around the music, where beginners and pros dance, sing, and play alongside each other.

FLORES: “You don’t have to be rock star status to participate in a fandango.”

This is Xochi Flores from Los Angeles. Flores says since anybody can be part of a fandango, it’s a powerful tool.

FLORES: “There’s so many roots to it, the Spanish, the indigenous, the African. We all kind of have those roots in our DNA, so it feels like home.”

When Flores traveled to Veracruz with other Chicano musicians, she says it was powerful to see how anyone could participate in a fandango, and everyone had a place.

FLORES: “It’s a microcosm of community because there’s all sorts of characters. You see people who participate through cooking and providing nourishment for the musicians, who sit there and write verses all night and just kind of like spew them out, who play, who dance, or people who just go to watch.” 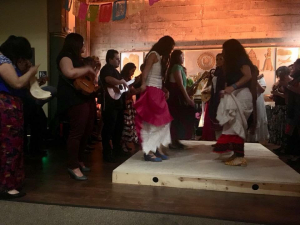 The fandango is a community party where the epicenter is the tarima platform. Photo: Chelis López.

At the fandango held as part of the Son Jarocho Festival in San Francisco, people of all ages filled the lobby of the Brava Theater, some picking out the melody on a jarana, or belting out verses, others keeping the beat by dancing. Somebody joined in with a flute. Some moms danced wearing their babies in rebozos, and one woman held a violin for a little girl to bow, along with the music.

GONZALEZ: “You can walk into any fandango, and the center is, more often than not, women. At the vortex of the fandango is the thing called the tarima. The women are the ones who do percussion, can end a song if we want to by calling una.”

GONZALEZ: “But beyond that, you have so many women writing verses as well now, so they’re deciding the direction of where some of these versos are going, influencing men who may not be as conscientious. A lot of men write beautiful things about women, but there are some men who write things that could be considered degrading. But they have to respond to more than a handful of women now, you know?”

A few years ago, Gonzalez started a project called Entre Mujeres, writing songs collaboratively with women from Veracruz and Chicanas from Los Angeles.

GONZALEZ: “We came up with great stuff. They were nervous, I’ve never done this before. I was like, it’s super fun, neither have I, let’s just do it! All of the songs reflect one or two of the women’s ideas, chocolate trade, love, giving birth, being pregnant and feeling heavy.”

Her favorite song? Chispas… which she announces at the festival, by saying it’s a mix of “blues and son ha-ROKE.”

GONZALEZ: “Laura Rebolloso had been doing research about how the chain gangs had music, blood sweat to build the railroads, how ty utilized music to self motivate. I love the tune because I feel like it was her version of the blues, what it sounded like, and she’s also very jarocha, the bass is amazing. Rocking. To have that come from this little mom of three, was just amazing.”

That’s not the only moment of California fusion at the festival. The Bay Area-based group Diapason plays a son called La Abejita, rooted in jarocho rhythms…, but with a Puerto Rican drum beat, and a bomba dancer, swirling and flapping her skirt to the drum.

It’s a blending of Caribbean cultures: Veracruz and Puerto Rico, each with their own blends of African, Spanish, and indigenous American cultures, meeting again here in California.

Founder of Diapason, Maria de la Rosa, is a leading cultural activist in the Bay Area. She says even traditional son jarocho has its own accent in California.

DE LA ROSA: “If you’re going to Veracruz even, from town to town, …each community has its voice and each fandango has its voice, way of expressing. I see that by extension in California. There’s definitely things we do differently because of who we’ve trained with, and because those maestros have always been, ‘Be you.’”

Not only have California musicians made their own sound. Playing son jarocho here has a different meaning, says De la Rosa.

DE LA ROSA: “For those of us who live here, grew up here, Latinos, born here and have a culture we’ve grown up in, but have felt a need to keep that quiet or not on the outs, … as an example, I wouldn’t blare Vicente Fernandez on my radio when I was in college. So to do something like son jarocho, like fandango, that is us, and our expression, and unashamedly so, it’s an act of resistance, preserving, conserving, all those things. It is an act of resistance, just in the sense of doing it, and not being ashamed of doing it, or intimidated to stop doing it. It is who you are.”

With each dance beat, each strum of the jarana, son jarocho musicians are saying we, Chicanos, Latinos, we are here, we are part of California, of the United States.

This feature is a production of Radio Bilingüe in partnership with the Alliance for California Traditional Arts. It’s part of Sounds of California, a radio series that captures the music and voices of the ever-changing California soundscape. Support was provided in part by the National Endowment for the Arts. Additional support comes from the California Arts Council.