California farmworkers to get new masks under bill on Newsom’s desk. Do they want them? 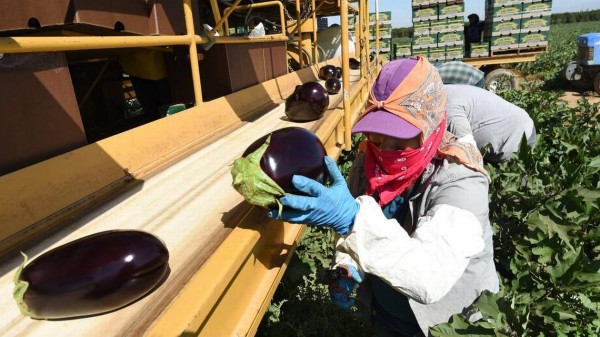 A bill moving through the California legislature would give farmworkers reliable access to a steady stockpile of N95 masks, which protect against exposure to wildfire smoke. ​ (Bee file photo) JOHN WALKER Fresno Bee file.

This story is part of the Central Valley News Collaborative — a bilingual, community journalism project funded by the Central Valley Community Foundation and with technology and training support from Microsoft Corp. The collaboration includes The Fresno Bee, Valley Public Radio, Vida en el Valle, Radio Bilingüe and the Institute for Media & Public Trust at Fresno State.

Lorena Moreno spent nearly a decade harvesting crops next to her husband in the Central Valley’s fields, bathed in sweat from working in the sweltering heat. In recent years, her husband, who is still laboring in the fields, has also been coming home with symptoms from an increasingly more present hazard — wildfire smoke.

He arrives at their Fresno home wheezing and with his head throbbing, Moreno says. He’s often unable to open his itchy, irritated eyes and is congested from inhaling air polluted with poisonous microscopic particles caused by wildfires. It’s a troubling set of symptoms that are growing more common among a workforce that already faces many hazards on the job.

That’s why some are now pushing for a bill on Gov. Gavin Newsom’s desk that would give farmworkers reliable access to a steady stockpile of N95 masks, which protect against exposure to smoke. Many supporters of the legislation, including growers, say it could help ensure that farmworkers are working in safe and healthy environments, even as the state’s harvest and wildfire seasons increasingly merge.

But farmworkers like Moreno and her husband say the law is “useless” to them unless it addresses deeper structural problems. Several researchers agree, saying the legislation, though well-intentioned, fails to address the root causes that create the hazardous conditions agricultural workers endure.

Economic necessity compels farmworkers to toil for low wages even during hot, smoky conditions, Moreno said. But masks alone won’t help curb those challenges, she said, because workers often don’t like wearing them. Wearing a mask in the fields can feel uncomfortable or cause trouble breathing. The masks can also become dirty quickly and are regularly contaminated by pesticides or field dust, she added.

“It’s a waste of time, it’s a waste of money, it’s a waste of resources,” the 38-year-old from Chiapas, Mexico, said in Spanish. “For workers like my husband, distributing masks at work isn’t going to help their situation. I think we’re going down the wrong path.”

Introduced by Assemblymember Robert Rivas, D-Hollister, in December of last year, the Farmworker Wildfire Smoke Protections Act, also known as AB 73, would designate agricultural employees as “essential workers” to allow them access to a dedicated supply of N95 masks.

The bill would also require the California Division of Occupational Safety and Health, known as Cal/OSHA, to post wildfire safety guidelines for farmworkers on its website. Employers would be required to provide training on these guidelines in “a language readily understandable by employees, taking account their ethnic and cultural backgrounds and education levels,” according to the bill.

The state legislature passed the bill last week and sent it to Newsom, who has until Oct. 10 to sign or veto the legislation.

Newsom is considering the bill as the state is in the midst of another intense fire season.

More than two million acres have already burned this year, exposing outdoor workers like farmworkers to ash and smoke. Prolonged exposure to wildfire smoke has been linked to increased rates of chronic heart and respiratory diseases. Without protective equipment like N95 masks, outdoor workers could risk lifelong health complications, according to a 2020 study from the Western Center for Agricultural Health and Safety at UC Davis.

California’s $50 billion agricultural industry employs about 800,000 farmworkers across the state, according to UC Berkeley.

Per state guidelines, employers must offer outdoor workers N95 masks for voluntary use if the air quality index for particulate matter 2.5 exceeds 151. Masks become mandatory when AQI exceeds 500, though the U.S. Environmental Protection Agency states anything above 150 is unhealthy for the general population.

The California Farm Bureau supports Rivas’ bill, according to Bryan Little, the farm bureau’s director of employment policy. In the event of N95 shortages, the legislation could make it easier for employers to comply with state regulations to provide the masks and recommend or require their use, he said.

Ian LeMay, president of the California Fresh Fruit Association, an alliance of farmers, said AB 73 is “the first step” in ensuring that farmworkers have more robust protections as the agriculture industry navigates climate change.

Yet he acknowledged that other challenges remain, as wildfire season and prime harvest months often occur at the same time. While he stressed that employee safety is of “paramount importance,” he said farmers can’t afford to tell their workers to stop crop-picking during the most vital season of the year.

“We want to be placing our employees in a safe, functional environment because we’re dealing with a perishable commodity and we can’t get that commodity off the tree or the vine into a box or into a packing shed and ultimately to the consumer without that available workforce,” LeMay said. “But the other issue we’re dealing with — and it’s a high hurdle for us to get over — is that June, July, August, September, October are the primary harvest times for many California commodities.”

Yet some experts say masks don’t get to the root of the problem.

Heather Riden, program director at the UC Davis Western Center for Agricultural Health and Safety, acknowledged the economic factors at stake during the harvest season and wildfires. But she said it may not be “feasible” or “realistic” for farmworkers to use masks on a daily basis in heat and smoky conditions.

“I recognize that growers have crops that need to be harvested or planted and workers need to work to be paid,” she said in an email to The Bee. “My fear is that regardless of these considerations, farmworkers and other outdoor workers are the ones paying the price with their health.”

Dr. Dvera Saxton, a researcher with the California Institute for Rural Studies, said while masks may be a temporary fix for wildfire smoke, the bill proposes piecemeal protections instead of larger, systemic reforms for an industry that employs many workers who are undocumented and lack access to critical healthcare resources.

“It’s kind of like you’re triaging the problem, but you’re not really addressing it” she said. “Masks are good, but they only do so much.”

Initially, the bill would’ve required Cal/OSHA to send a “wildfire strike team” to investigate employers’ compliance with smoke protection requirements at agricultural work sites when air quality standards reach dangerous levels. But the provision has since been removed — a decision Rivas said was made as a “compromise” during the amendment process.

The bill no longer includes an enforcement component.

Still, Rivas is hopeful that, through the bill’s educational requirement, farm workers will learn about their rights and how to file a complaint with Cal/OSHA.

“There are a lot of great agricultural companies willing to play by the rules, but there are some that certainly fall short,” he told The Bee in an interview last week. “And so those are the circumstances, those are the issues that we need to address. That’s why this education component is so critical. It is to ensure that agricultural workers not only have the information as it pertains to personal health and safety, but that they also have the information about their rights and about who they can contact should an issue arise.”

But for Moreno and her husband, the protections included in the legislation would offer little relief.

She said masks won’t help her husband, who has already developed multiple health problems from years of working in the fields. She says their low wages, documentation status and lack of healthcare prevent them from getting him the help he needs.

This entry was posted in Coronavirus/COVID-19, Homepage Feature, Politics, Health. Bookmark the permalink.