In Los Angeles, a group of workers who clean airplanes in the international airport are about to go to labor court with their employer, a contracting company, charging him with stealing overtime and minimum wages. As this issue is decided in court, an anti-wage theft bill advances in Sacramento, proposing penalties on those employers who opt to avoid paying owed wages. In the next days, the president of the California senate, Kevin de León, author of the bill, will hold a citizen forum in Los Angeles, city known as the wage theft capital of the country. With more details, our correspondent in Los Angeles, Rubén Tapia. 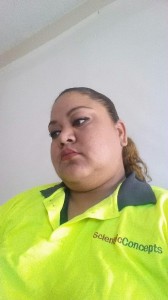 Anabel González has been working with Scientific Concepts for three years. Foto Courtesy of González.

Anabel González has been cleaning planes for ten years. In between flights, she goes on planes to clean them with a team of more than ten workers .

“I liked the work,” says González. “But I don’t like the company.”

The company is “Scientific Concepts,” which has been around for more than 20 years and has more than 100 workers at the Los Angeles airport. González has been working for this company for three years.

“If the plane is ready before half an hour, it’s a break. And if it’s not ready before the half hour is up, it’s lunchtime. Basically, we were working anyway, because we were waiting for the plane to be ready, to get on,” she explains.

“We didn’t have a place to go and punch in and out for lunch. They decided what time our lunch started,” she says.

This irregular form of shrinking or expanding the hours of breaks and lunches, as well as start and end time, according to the company’s needs, made González’s workdays start around 9 a.m. and end after 7 p.m. That caused problems with her husband. 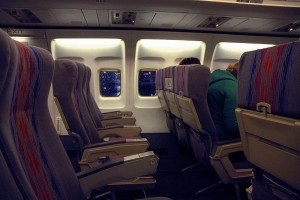 Scientific Concepts workers clean the inside of airplanes like this one, between flights. Photo: Doug, via Flickr. Licencia de Creative Commons.

“We had problems because he would say, ‘How is it possible you leave in the morning and come back at night and have only worked five or six hours?’” says González.

González, who was born in Los Angeles, had worked before for a similar company that did respect schedules.

“I complained several times, but they (Scientific Concepts) still did it,” she says.

So González and 19 of her coworkers filed a claim of wage theft with the California Office of the Labor Commissioner. After an investigation that took almost two years, the state decided in favor of all the workers of “Scientific Concepts.” The company did not respond to calls asking for an interview.

“The ticket the state gave to the company was for 966,000 dollars, for 187 workers. There were four citations: minimum wage, overtime, lunch and break,” says Maricela Salinas, investigator for the Maintenance Cooperation Trust Fund (MCTF), a watchdog organization that works to abolish illegal and unjust labor practices in the janitorial industry.

Still, Anabel González has her doubts.

“I know we are going to win. But will we get our money back? I doubt it,” says González. 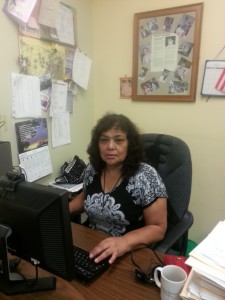 Maricela Salinas is an investigator for a janitorial watchdog group, MCTF. Photo courtesy of Salinas.

According to statistics from the National Employment Law Project and the California Division of Labor Standards Enforcement, of every 100 workers who win a wage theft in the state, only 17 get the money they are owed.

That’s why the recent approval by the California Senate of SB 588, the Fair Day’s Pay Act, was received with such great enthusiasm.

“Senate Bill 588 gives California Labor Commissioner additional tools, to fight the problem of wage theft in our state. In recent UCLA study finds that in Los Angeles County alone, workers have more than one billion dollars’ worth of wages stolen from them each year,” emphasized Senate President pro tempore Kevin de León before asking his colleagues to vote.

The Fair Day’s Pay Act has high possibilities of being passed by the Assembly, too, and signed by Governor Brown, according to Tia Koonse, researchers with the UCLA Labor Center.

“It will be the first of its kind that combine all of these tools: joint liability, individual liability and improving the Labor commissioner’s specific tools to collect the stolen wages,” says Koonse.

“At any given week 68 % of low wage workers across the country experience violation of any of our most basic labors protections; minimum wage, overtime, the right to take a meal or rest brake, the right of not have to work off the clock for not pay or little pay or take illegal deductions from your paid check such as tip’s stealing,” says Koonse.

Koonse says the legislative progress against wage theft in California were possible thanks to a wide support movement that ws built, a movement that is needed nationwide in order to effectively fight this serious problem.