The second Republican presidential debate, held in Simi Valley, California, again brought up the issues of closing borders, removing the right to citizenship for children of immigrants, and deporting immigrants, as a response to a failed immigration system. Outside the Reagan Library, where the debate was held, a group of union leaders, activists, and families called on Republican candidates to stop blaming immigrants and to propose solutions to the serious problems of the country. Our correspondent in Los Angeles, Rubén Tapia, reports that among the protesters were two young U.S. citizens like those called “Anchor Babies” by conservative groups. 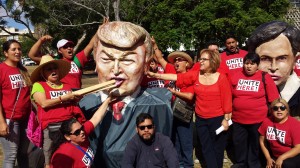 “Stop the hate in the GOP Debate! Dump Donald Trump!” yelled the protesters outside the Ronald Reagan Library. Among those protesting was Ariana Galindo. She’s studying political science and has been an immigrant rights activist for four years. Galindo is 18 years old and ready to vote for the first time. But it won’t be for Donald Trump.

“It makes me so angry that he talks like that about my people,” says Galindo in Spanish.

Galindo was born in Los Angeles to Mexican immigrant parents. She and her younger brother are U.S. citizens, and her older brother has DACA. Their dad works in the garment industry and their mother in retail. 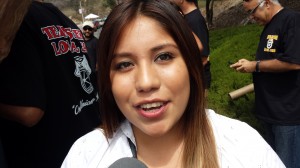 “My parents spend their whole lives working. Their biggest concern is to take care of us and give us everything they could not have,” says Galindo. “If my parents have to leave, well, so will their kids. And that has always been a fear that I grew up with since I was little.”

Nineteen-year-old Scarlett Villacorta is also hear to defend her parents, who are from El Salvador.

“They met here and decided to have a family. They didn’t come to have an ‘Anchor Baby’ and live the American dream,” says Villacorta in Spanish.

She says Trump’s insults motivated her to political participation.

“We are not rapists, we are not criminals. When he announced that, it made me more interested [to participate] because he is just amplifying all this hate,” Villacorta says. 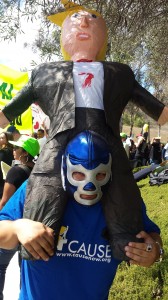 Days before the debate, union and immigrant rights groups sent a letter to CNN, that organized the debate along with a network of conservative outlets. They asked them to question the incendiary rhetoric of the Republican candidates, says union leader María Elena Durazo.

“Asking that the debate be more positive, that they stop racism, stop hate, and focus on solutions: jobs that pay dignified wages, immigration reform, respect by police, especially toward African-American and Latino communities,” says Durazo in Spanish.

The debate didn’t end up that way. But outside, the ambience was festive and full of hope. Among those protesting was a man in a blue mask who called himself the Defensor de Los Ángeles, the Defender of Los Angeles, carrying a large Trump doll on his shoulders.

The Secretary-Treasurer of United Service Workers West, Alejandra Valles, says the unions have a goal to mobilize a million young votes in three key places next year. 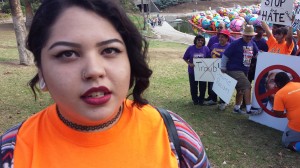 “In Florida, in Las Vegas and Colorado, because in those states, we saw there are a lot of immigrants and a lot of Latinos. We also know that if we turn those states, that can make a difference in the presidential election,” says Valles.

One of the motors of that campaign will be young people like Ariana Galindo and Scarlett Villacorta, who says she is ready to participate, registering other young people to vote.

This entry was posted in Homepage Feature, Immigration, Youth, Politics. Bookmark the permalink.