Every year, low-wage workers in the United States lose an estimated 50 billion dollars because of wage theft, which happens when employers don’t pay them the full salary or overtime they deserve. This crime is rarely investigated and is usually not punished, which is why it is notable that a supermarket chain that markets to Latinos was fined for wage theft in ten of its stores in Los Angeles. Our correspondent Rubén Tapia explains the accusations against the company. 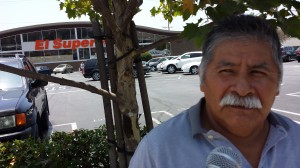 “They would charge us for our uniforms, our shirts, and they would take that out of our paycheck every week,” says Jiménez.

Like many employees at El Súper, Jiménez didn’t work full time. During his daily six-hour shift, he had to make more than 1500 bread rolls.

“I would hardly ever take my ten-minute break for the same reason, because I had to make the bread. There was so much pressure from the bakery manager, I had to punch out for my lunch break, and then I had to go back and work anyway to get all the work done,” says Jiménez.

The pressure to finish the quota of bread and the weight of carrying sacks of flour and sugar to make the bread caused Jiménez to get a hernia, he says. Then, he was fired.

“They said, you can’t work anymore. And I said, okay, thanks,” remembers Jiménez.

El Súper has more than 40 stores in California, Nevada and Arizona. The legal owner is Bodega Latin, Incorporated, which is part of the Chedraui Group, one of the largest supermarket chains in Mexico. 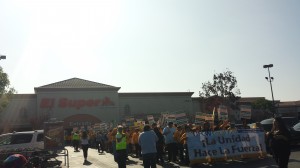 Many workers at El Súper in Los Angeles have similar complaints. After investigating payroll files and interviewing workers, California’s Labor Commission found that the company did not pay overtime or give lunch or rest breaks to 20 workers at ten stores in Los Angeles. The company was fined more than 180,000 dollars for wage theft.

Garza says in addition to the fine, the corporation also owes employees “$101,084 to employees at 10 supermarkets, for illegal deductions for uniforms.”

The company has until July 20th to pay the fine and reimbursement or appeal the decision. El Súper officials say the accusations are unfounded and they will present information proving that when they get a hearing.

“If there are more employees who are affected by wage theft, they can present a claim to the office of the Labor Commissioner,” says Garza.

The news of the fine and possible reimbursement came to baker Antonio Jiménez right at the time he is about to spend his savings to cure his hernia, which has gotten worse.

“I’m going to have an operation because I can’t walk anymore because of how big the hernia is. I want justice,” says Jiménez.

If you believe you were the victim of wage theft, you can find more information about how to file a complaint with the California Labor Commissioner here: www.wagetheftisacrime.com.