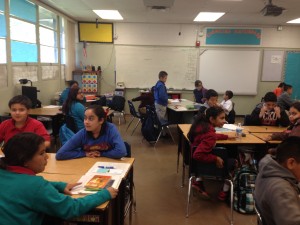 Valley View struggles to find the funds to pay for books and materials in Spanish. Photo: Valeria Fernández

Dual language immersion in the U.S. was implemented with the goal of helping Spanish-speaking students to learn English, while preserving their Spanish. At the same time, native English speakers benefit from learning another language. In Arizona, dual language immersion programs are gaining momentum and demand among Anglo families in wealthier school districts, while dual immersion schools that cater to Latinos continue to face obstacles for funding and resources. Valeria Fernández reports.

Listen to the Story “Dual Immersion in Arizona”

“Ya tengo un grupo que va a presentar primero, ustedes van a escuchar con mucho respeto,” says Cristina Arnieri, as she gathers her students for a group presentation on science. In her classroom at Desert Willow Elementary, children only speak Spanish.

Most of the third grade children are white and speak English at home.

“The soil is nature, the soil needs water…” reads one of her students in front of the class. Desert Willow is among a few dozen schools in Arizona that have dual immersion programs. In this school, half of the classes are English and the other half in Spanish. Arnieri teaches third graders science and math in Spanish, and another teacher does social science and reading in English.

“We both have to be on the same page to have the same goals for the kids, and that is really helpful that we can do that and we feed off of each other,” said Arnieri.

Arnieri’s partner teacher Amy Arnett notices that the children use concepts they learn in Spanish in the English classroom, too.

“So they’re able to have knowledge in both classes and different subject areas and carry that knowledge over,” said Arnett.

Both teachers say students learn to think in two languages and outside the box. The program has been so popular that Desert Willow has a waiting list. Most parents in the Cave Creek School District are Anglo, and they want their children to learn a second language, says Cristina Ladas, the coordinator of World Language and Immersion Programs for the district. She says research shows this type of education also helps children learn more and better.

Desert Willow has funding from the district to purchase books and needed resources to teach classes in Spanish. It also has a large, active group of parents who fundraise for the school. The median income in the area is over 100,000 dollars a year.

Thirty miles from Desert Willow, the situation at another dual immersion school in South Phoenix is quite different. Valley View Elementary School has a majority of Latino students. Over half of the kids speak Spanish at home.

“What is the most important thing that you want to convey about this book in your presentation?,” Virginia Koppel asks one of her students. Koppel teaches reading in Spanish to eighth graders ages 14 to 15.

“A mi me gustaría…este libro les ayude por su parte con la felicidad de su cuerpo…” “I would like this book to help them with being happy about their bodies”, he answers.

Carlos García’s parents enrolled him in Valley View so he can become proficient and literate in his home language, Spanish. Experts say dual immersion also helps children who speak other languages learn English. For the past 23 years, Valley View has had one of the longest running dual immersion programs. But it only goes from fifth to eighth grade.

Three years ago Bryce McClellan was assigned as the new school principal. McClellan only speaks English, and this is his first experience with dual immersion. He discovered that the program is so effective academically that he plans to expand it to start in kindergarten.

“Our children in this community and our families in this communities, they deserve the opportunity to be bilingual, to be bicultural, and honor their heritage,” said McLellan.

“In reality having bilingual education in the state of Arizona has been a political battle that has to do with the linguistic rights of groups that have been oppressed historically,” said Koppel.

Valley View parents are involved in their children’s education but their ability to help financially is limited. According to the 2012 Community Survey Census data, nearly 1 out of 3 children in the district live in poverty. Compare that with the other district, Cave Creek, where only 1 in 25 children are from families that live below the poverty line.

Gabriela de Jesús, a fifth grade teacher at Valley View, says she has to come up with outside resources to teach her students how to read in Spanish.

“The Consul of Mexico gave us some books to have in the classroom to use as resource for the students in the program, we don’t have enough for every student but we can use that us a resource,” said De Jesús.

The school didn’t use to receive funding from the district to buy books in Spanish. But next semester, McClellan say things will change, after he made a request. Lack of resources for dual immersion programs is not uncommon in other districts in Arizona, according to educators.

A new state law signed by governor Jan Brewer would create pilot programs for dual immersion for critical languages like Russian, Arabic, Portuguese, Chinese and Spanish. Yet, critics say it has a major drawback: English language learners and native speakers of these languages would be excluded.

“Just because they pass a proficiency test, it doesn’t mean that they should be excluded from expanding their second language,” said State Senator Ana Tovar who voted against the bill.

Representative Macario Saldate, another democrat, believes the bill could be open to legal challenges for excluding a certain group of students. But he also thinks it is a positive step forward in a state like Arizona that banned bilingual education in 2000.

“We need the language resources in this country and we need to develop it beyond what it is now,” said Saldate.

Students like Dominique Troyanos hope to capitalize on those resources. She is among the first dual immersion students to graduate from the Cave Creek District. She’s 17 and wants to be an interpreter for the United Nations.

“With so many people speaking Spanish in Arizona, I don’t know why we don’t have more schools teaching it,” said Troyanos.

Educators argue that dual immersion has extra benefits beyond the academics. It promotes diversity in the classroom and appreciation of cultural differences among students.

This entry was posted in Education, Homepage Feature. Bookmark the permalink.