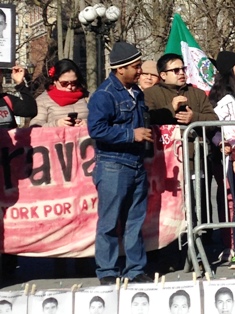 On March 25, Members of the Congressional Hispanic Caucus (CHC) will meet with representatives of the group of parents of the 43 forcefully disappeared students in the State of Guerrero on September 26 of last year.

Congressional Hispanic Caucus members will meet with Felipe de la Cruz Sandoval and Vidulfo Rosales Sierra. Felipe de la Cruz Sandoval is the spokesperson for the group of parents and a member of the faculty of the Rural Teachers College of Ayotzinapa Guerrero. His son, a student at the college, survived the police attack that resulted in the death of 6 people, the wounding of 25, and the forced disappearance of the 43 Ayotzinapa students. Vidulfo Rosales Sierra is a lawyer at the highly respected Tlachinollan Human Rights Center, which promotes and defends the rights of the indigenous and poor people in Guerrero, Mexico. Vidulfo has worked closely with the families of the 43 disappeared students and is highly informed about their case.

“These 43 teacher-in-training students have become the faces of the of the hundreds of thousands of Mexicans and Central American migrants that have become victims of the so-called Drug War financed by the United States under Plan Mexico, a result similar to what occurred in Colombia under Plan Colombia” said Arturo J. Viscarra, of SOA Watch and the Washington, DC committee coordinating Caravana43 activities in the capital, Ayotzi43DC.

De la Cruz Sandoval and Rosales Sierra are in the country as part of Caravana 43, a US Latino grassroots initiative that seeks transparency in the Mexican government’s handling of the Ayotzinapa case and supports the group of parents’ demand for justice. Chicago Congressman Luis Gutierrez’s office will host and invite other CHC members to the meeting with the representatives of the Caravana43.

Felipe de La Cruz, spokesperson for the group of parents said that “Caravana43 purpose is to provide an international forum for the parents who have lost their children in a government of systemic violence and impunity. Another important goal of the caravana is to shed light on US foreign policy, specifically the Merida Initiative and its connection to socioeconomic conditions and violence in Mexico” which he hopes to discuss at the meeting with Latino legislators

The meeting is set scheduled for 2pm in Rayburn House Office Building, one of three House buildings along Independence Ave across from the U.S. Capitol.
De la Cruz Sandoval and Rosales Sierra will be available for comment for press at 5 pm, an hour before a public event at CASA de Maryland (8151 15th Ave, Hyattsville, Maryland 20783, public event begins at 6 pm) on Wednesday evening.
Press Contacts:

This entry is available only in English

This entry was posted in Homepage Feature, Mexico. Bookmark the permalink.