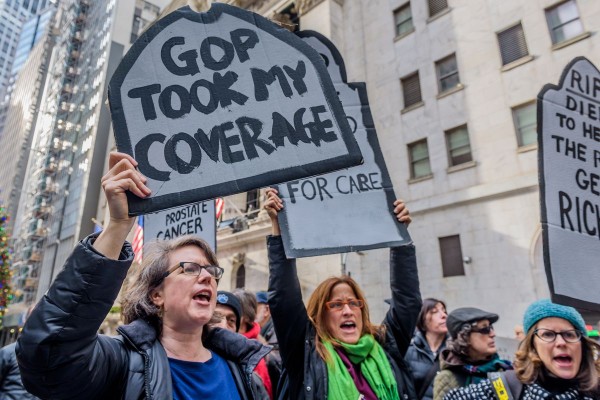 Health care proved important but apparently not pivotal in the 2018 midterm elections on Tuesday as voters gave Democrats control of the U.S. House, left Republicans in charge in the Senate and appeared to order an expansion of Medicaid in at least three states long controlled by Republicans.

In taking over the House, Democrats are unlikely to be able to advance many initiatives when it comes to health policy, given the GOP’s control of the Senate and White House. But they will be able to deliver an effective veto to Republican efforts to repeal the Affordable Care Act, convert the Medicaid health care system for low-income people into a block grant program and make major changes to Medicare.

One likely development is an expansion of Medicaid in several of the 18 states that had so far not offered coverage made available by the Affordable Care Act. Voters in Idaho and Nebraska easily approved ballot measures calling for expansion. A similar measure was leading in Utah based on incomplete returns.

In Montana, voters are deciding if the existing expansion should be continued and the state’s expenses covered by raising tobacco taxes. In preliminary results, opponents outnumbered supporters, but key counties were not expected to release their tallies until Wednesday.

Medicaid might also be expanded in Kansas, where Democratic gubernatorial candidate Laura Kelly defeated GOP Secretary of State Kris Kobach. The Kansas legislature had previously passed Medicaid expansion, but it was vetoed in 2017 by former GOP Gov. Sam Brownback. Kobach had not supported the ACA expansion.

And in Maine, where voters approved Medicaid expansion in 2017 but GOP Gov. Paul LePage refused to implement it, Democrat Janet Mills was victorious. She has promised to follow the voters’ wishes. LePage was not running.

The abortion issue was also on the ballot in several states. In Alabama and West Virginia, voters approved state constitutional amendments that would make it easier for the states to ban abortion entirely if the Supreme Court were to overturn Roe v. Wade. Oregon voters, on the other hand, defeated a measure that would have restricted public funding of abortion and insurance coverage for abortion.

The mixed results allowed both sides of the polarized abortion debate to claim victory.

“This election is a major victory … for everyone in this country who cares about access to health care and access to reproductive health care,” Deirdre Schifeling, executive director of Planned Parenthood Votes, told reporters in a conference call.

Said Marjorie Dannenfelser, president of the anti-abortion Susan B. Anthony List: “Yesterday was a clear victory for the pro-life movement. The Senate once again has a pro-life majority — a ringing affirmation of President Trump’s pro-life agenda from the American people, who have seen him deliver on a key promise by appointing two outstanding Supreme Court justices.”

In exit polling, as in many earlier surveys in 2018, voters said that health care, particularly preserving protections for people with preexisting conditions, was their top issue. But health care remained more important to Democrats than to Republicans.

Those who urged Democrats to emphasize health care this year took credit for the congressional successes. “The race for the House was a referendum on the Republican war on health care. You know it, I know it, and the Republican incumbents who shamefully tried to cover up their real record on health care and lost their seats know it,” said Brad Woodhouse of the advocacy group Protect Our Care.

But the issue was not enough to save some of the Senate Democrats in states won by President Donald Trump in 2016. Sen. Claire McCaskill (D-Mo.) was defeated by GOP Attorney General Josh Hawley, who is a plaintiff in a key lawsuit seeking to declare the Affordable Care Act unconstitutional. Sens. Heidi Heitkamp (D-N.D.) and Joe Donnelly (D-Ind.), who also campaigned hard on health care, were defeated.

Nonetheless, Sen. Joe Manchin (D-W.Va.) beat Republican Patrick Morrisey, the state’s attorney general who is also a plaintiff in the lawsuit seeking to upend the ACA.

Rep. Nancy Pelosi (D-Calif.), the leader of the House Democrats who would be first in line to take over as speaker, told supporters gathered in Washington for a victory celebration that her caucus would make health care a key legislative issue.

“It’s about stopping the GOP and [Senate Majority Leader] Mitch McConnell’s assault on Medicare, Medicaid and the Affordable Care Act and the health care of 130 million Americans living with preexisting medical conditions,” she said. She pledged that Democrats would take “very, very strong legislative action” to lower the cost of prescription drugs.

In a wide-ranging news conference on Wednesday, Trump struck something of a conciliatory tone toward the new Democratic majority in the House.

“I believe Nancy Pelosi and I can work together to get a lot of things done,” Trump said. “I suspect [House Democrats] will come up with some fantastic ideas that I can support … including prescription drug prices.”

Among the many new faces in the House is at least one with some significant experience in health policy. Former Health and Human Services Secretary Donna Shalala, who ran the department for all eight years of the Clinton administration, won an open seat in Florida.

Several members of the House and Senate were reelected despite serious ethical and legal troubles. Among them was Rep. Chris Collins (R-N.Y.), who was charged in August with violating insider trading laws while promoting Innate Immunotherapeutics, a small Australian biotech company.

[Update: This story was updated on Nov. 7 at 1:50 p.m. ET to reflect the latest election results.]