The Centennial of Violeta Parra in Berkeley

In addition to the celebrations of the centenary of Violeta Parra, Marci Valdivieso, producer, guitarist and singer gives us here this text that commemorates the one hundred years of the Chilean singer-songwriter who preceded her and who has been a source of inspiration for her own song. 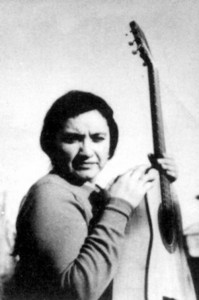 There are those who inspire us to continue the difficult struggles, to believe in justice and to remember history. There are also those, who teach us to cultivate our cultures and work our languages with the depth and grace of those who go beyond in poetry and rhythm, presenting an aesthetic rooted in the vital Latin American soil, ladies and gentlemen may I present to you, Mrs. Violeta Parra Sandoval (4 October 1917 – 5 February 1967).

Violeta Parra is among those voices that the stillness and forgetfulness of death, have yet silence. Her farmer’s vitality, her sense of survival, her defiance and her mestiza identity have been interwoven in her songs still sung throughout the planet. For the Chilean people, her ethnomusicological research continues to be a source of cultural understanding and further study.

The colors and mystical character found in her artistic endeavors, her arpilleras, her weavings, and oils on wood, cloth and cardboard continue to dazzle those who expected her to be a small-town Latin American woman.

It would be best to re-imagine Violeta Parra as the strength of Mother Earth, turbulent and profound, she rattles us with her aches and passions described in words, in rhyme and melody.

Violeta shapes our soul and nestles there plowing her songs in the tonada, sirilla, refalosa and cueca styles. Her cosmogenic lyrics about the Chilean countryside hold the fragrance of fresh-cut grass, the crisp desire for love, a challenge for those, who don’t return her love.

These are the images in sonnet of those who cultivate and work the soil, with their happiness and mischievousness, throughout the continent. But make no mistake, her songs are not the typical writings of those who have never harvested a thing, nor have lived through hunger and poverty. Violeta has herself experienced the ravages of need, the sense of injustice and the need to make changes in our societies. She describes the dark night lived by the miners in the Pampa (prairie), the line of women around the only water fountain in town, the students with rebellion and desire for justice in their hearts, and speaks to us about a world in mourning over the loss of Garcia Lorca in Spain.

Violeta Parra Sandoval, was born in San Carlos, Chillan, Chile, a century ago, on October 4th, 1917, towards the end of the first world war. Her family is the victim of poverty during the time of the Great Depression, and she grows up singing and scratching her way to survival, to create her place in the society of her time.

Starting in 1952, Violeta searched for creativity by walking the rural Chilean roads compiling songs, ten-line sonnets and popular wisdom. During this search, she headed into the unknown world across the sea towards Europe, sharing her music in Poland, Geneva and Paris, and then returning to Chile transforming herself into a Latin American citizen, more attuned to the universal struggle for social justice, workers’ and farmers’ rights. Her independent spirit, her resilience before society’s scorn of her lack of preconceived physical beauty, her rejection of traditional female roles, of the wife at home with her head held low, and her prolific musical creation, bear the characteristics of a true feminist, a woman ahead of her time.

In part due to her travels, her famous visual work was created in Santiago, Buenos Aires, Paris and Geneva between 1954 and 1965. In fact, Violeta, with her tremendous perseverance was able to secure the exhibition of her work, called “Tapestries of Violeta Parra” at the Museum of Decorative Arts in the Marsan Pavilion of the Louvre Museum in April 1964, she was the first Latin American woman to do so. Currently, her pieces have been exhibited at museums throughout the world.

For all reasons above, during this year, her 100th anniversary, we remember our Violeta Parra whose songs have kept us company throughout time, in and out of Chile, songs such as the unforgettable – Gracias a la vida (Thanks to life), Volver a los diecisiete (To be seventeen again), El Gavilan (The Chicken-Hawk) and Maldigo del alto cielo (I curse from the sky above).

Together with organizations and artists of all types – at different cities throughout the world, we celebrate Violeta with festivals and concerts in her honor. 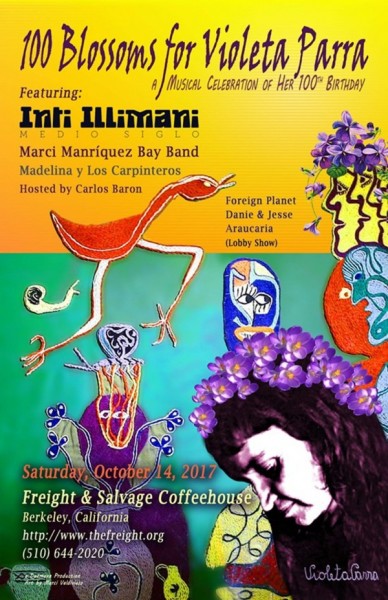 On October 14th, 2017, you are invited to celebrate and learn a little bit more about Violeta Parra in the Bay Area. Starting at 7:00 PM at the Freight & Salvage Theatre, located at 202 Addison Street in Berkeley, California. Direct from Chile, we will be presenting Inti-Illimani, a group celebrating its fiftieth anniversary with the publication of a truly beautiful rendition of Violeta’s music. We will also be joined by Karen Kerschen, a Violeta Parra biographer, who published By the Whim of the Wind; a collection of essays about moments in the life of Violeta Parra. Three local bands will also celebrate with us, the Marci Manriquez Bay Band, Foreign Planet and Madelina y Los Carpinteros who will present Vientos Violeteros a 4 Movimientos (Violeta’s Airs in 4 Movements)

The program will be introduced by Professor Carlos Baron, a beloved Bay Area actor.

We thank all our Friends who have supported us in this Project, especially those in media communications who helps us disseminate Latin American culture.

This text by Marci Valdivieso was originally published in the LatinOpen in September 2017.

My brother left me speechless,

When he spoke to me about

to my great surprise

“Since you know all ‘bout it

the popular verse and all,

your plight with a poet’s twist”

I am so busy workin’

Going to and fro’

you’ve no idea the pain

in the verses, I’ve found

my pockets are empty

and I have four mouths

that I’ve got to feed

In the few moments between

The fields and recordings

I pick up my guitarron

Or better yet my “axe”

I feel a lull with them

To put my nerves at rest

Since this haughty world

Has destined me to this task

And damn the benefits

As the proverb says

of such delicate verses

They sing their sorrows

Full of hope and faith

While others demand changes

To our bitter ailing

Fatal among the fatal

I am trailing these wanderings

Finally, humble brother of mine

who understands not my stance

Don’t you know that one rope can

only lasso a single young steer?

nearly enough to slake my thirst

And meanwhile, the flag flits to an’ fro’

and whistles not a word of sympathy

This entry was posted in Arts & Culture, Homepage Feature. Bookmark the permalink.