The immigrant women detained at Berks County Family Residential Detention Center in Pennsylvania have been on hunger strike to protest the conditions of detention for themselves and their children. Most of those detained here and in other family detention centers in the U.S. are Central Americans who have come fleeing violence. Though the government considers these centers a humanitarian alternative, many mental health experts say they are adding trauma to children who have already seen a lot of trauma in their lives. Radio Bilingüe reporter Valeria Fernandez visited some of the families detained at Berks and has this story. It is part of our series, “Hablando de la Raza.”

Every night before going to bed at the family detention center, Isamar Sánchez thinks about the men that threatened her life in El Salvador. Their presence haunts not only her nightmares, but also those of her 8-year-old daughter, Jacquelinne.

“She says that she has dreamed many times that we’re in El Salvador and they are chasing us. Because she knew of the threats we had in my country,” said Sánchez in Spanish.

Sánchez was a single mother in her country and suffered domestic violence. She fled El Salvador in 2014 after she was threatened by gang members shortly after she opened a street cart to sell pupusas, a Salvadoran dish. They wanted her to pay a fee, for running her business. She paid them a couple of times. But it wasn’t long until her sister’s husband was killed for refusing to pay them.

Sánchez and her daughter Jacquelinne have been detained for almost half a year at the the Berks County Family Residential Center in Leesport, Pennsylvania. Because recorders aren’t allowed in the facility, these interviews were recorded over the phone.

The center is surrounded by a park with pine trees. There’s a basketball court and a soccer field, slides, park benches and rocking chairs. But everything is behind a wooden fence. Parents and children are constantly under the watch of staff from the center.

“She comes over when she wakes up and hugs me, crying, and she says, ‘Mommy, why do I have to be locked up in this jail when I’m supposed to be outside with my family?” said Sánchez. 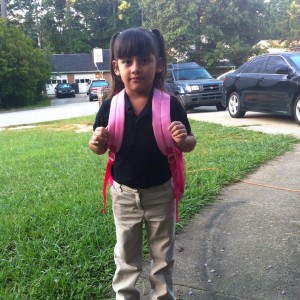 Last summer, a federal judge ordered the release of all families being held in private, secured and unlicensed facilities, unless they represented a flight risk. This July, the Ninth Circuit agreed that children must be released, but not their parents. The Department of Homeland Security implemented reforms to try to reduce the time that children are locked up, but at the same time, the government argued in court that detention is a deterrent to other families from risking the dangerous journey to the U.S.

Mental health experts warn that depriving families of their freedom traumatizes children who in many cases were victims of violence in their countries.

“Detention creates additional stress, that can really raise to the level of trauma”, said Luis Zayas, a mental health expert and the dean of the School of Social Work at the University of Texas, Austin. He’s interviewed hundreds of families in detention. “The fear and anxiety is along with the deprivation of not knowing what their future would be like. Will my mother and I receive asylum and be able to stay in the U.S. or will be deported back to Honduras, El Salvador, Guatemala?”

Sánchez and her daughter were among a group of 121 Central-American, adults and children detained during a federal government operation last January in Virginia, Georgia, Texas and North Carolina with the goal of deterring further migration. Her daughter still has flashbacks of that day.

“’I don’t want to leave, I don’t want to leave,’ she told me. She was trembling. I just hugged her. And I told her, ‘Honey, everything will be ok.’ I asked them if I could give her something to eat or drink because she hadn’t eaten, and they said I didn’t have the right to give her anything,” said Sánchez.

With time, detention has affected her daughter more.

“She was doing well in her classes and now her grades are going down. She barely eats,” Sánchez said.

The center lost its license from the Department of Health Services from Pennsylvania because the facility wasn’t created to house children with adults. Yet, immigration authorities said they’ll continue to use it pending an appeal.

“There is a fundamental problem, and it is that this is a law-enforcement agency whose mission is to deport people and there’s no mission to take care of the health and safety of children,” said Olga Byrne, an investigator with the organization Human Rights First. In August, 2015 she met with 23 families at Berks, the facility where Sanchez is detained, and she documented several problems. Mothers weren’t able to make independent decisions for their children’s well-being, like having over the counter medicines available or making choices about their meals. And children were sleep deprived.

“They are woken up every 15 minutes throughout the night with a flashlight,” said Byrne. “Many children were scared so they couldn’t sleep.”

Immigration and Customs Enforcement, or ICE, said they couldn’t comment on the practice due to a pending lawsuit. Another alarming issue for Byrne was the lack of Spanish speaking mental health therapists. According to ICE, 40 percent of the staff speaks Spanish at least at a basic level, but Sánchez had to speak with the therapist through an interpreter over the phone.

“It doesn’t inspire trust to tell him my problems,” said Sánchez.

Social work scholar Zayas says there’s not enough research on the experience of children in detention because the government hasn’t granted access for those type of studies. But he said scientific research shows that repeated instances of stress during childhood have long-lasting consequences.

“As more stress is piled on stress, it accumulates and it stays on for prolong periods of time, we do know that adults psychological problems arise and so do chronic physical illnesses,” said Zayas. 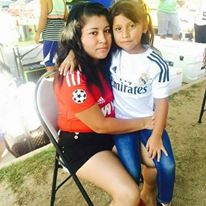 Isamar Sanchez and her daughter. Photo courtesy of Isamar Sánchez.

According to mental health experts some children react to what they feel is being locked-up by blaming their parents, dissociating from them or clinging. Maria, another Salvadoran mother who asked to use a fictitious name because of how her story could impact her children, was detained for 6 months with them.

“They were very sick and my son would tell me: ‘Mommy, get me out of here. I don’t feel well,’” said Maria. “And for me it was difficult. ‘Mommy, my brother is sick and its your fault because you brought us here.’ I can’t tell my son, ‘Look, son, I brought you here because I was afraid they would kill you or they would separate you from me forever.’”

Both Maria and Sánchez are part of a civil lawsuit claiming detention harmed their mental health and that of their children. Maria was released in June after attorneys won an appeal on her case. But Sánchez didn’t win an appeal. Her attorneys asked the court to reconsider the decision. Meanwhile ICE won’t release her, because they see her as a flight risk. Sanchez still hasn’t told Jacquelinne.

“She says, ‘Mom, What’s wrong? Something is wrong.’ I say, nothing, I have a headache. Because I know I’ll break her heart if I tell her, because she has the illusion of staying here in the U.S.,” said Sánchez.

On a breeze May afternoon, during the visit, Jacquelinne was returning from a tour at the local Hershey’s chocolate factory. Her hair was pulled from one side of her face with a white and black dotted ribbon. The next day was her birthday. She said she wants to be an attorney when she grows up, to stop the deportation of families like hers.

Only time will tell how deep the invisible wounds of her experiences go and what impact they’ll have on her future.

Check out Valeria’s other story on this subject on PRI: http://www.pri.org/stories/2016-07-07/these-asylum-seekers-are-being-forced-raise-their-kids-immigration-jails.

This entry was posted in Homepage Feature, Immigration. Bookmark the permalink.