A Mumps Quarantine In La. May Encroach On Rights Of Detained Immigrants 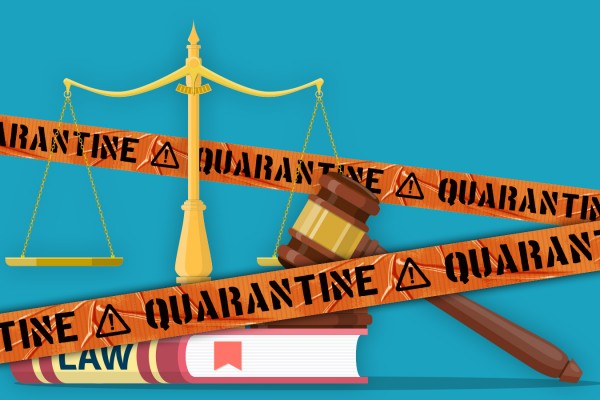 By Shefali Luthra and Julie Appleby

A mumps outbreak and quarantine at the Pine Prairie Immigration and Customs Enforcement Processing Center in Louisiana blocked immigrants from legal resources, including their lawyers and the law library, for about two weeks in January and February, according to the attorneys.

The outbreak has also raised questions about how officials dealing with public health concerns can undermine detainees’ legal rights.

Lawyers said the illness did not stop immigration court proceedings — meaning from at least Feb. 3 to Feb. 14 quarantined individuals were required to continue with removal hearings, conducted from their dorm rooms via video chat, while not receiving access to legal aid.

Pine Prairie, run by the privately held GEO Group, is a 100-mile drive northwest of Baton Rouge. It holds about 700 immigrants awaiting hearings to decide whether they can stay in the United States, accept voluntary repatriation or face deportation.

Emily Trostle, an attorney with the local branch of the Southern Poverty Law Center, estimates about half of these people — between 300 and 400 — were quarantined to their dorms. As of Feb. 14, 288 detained people were under quarantine, according to an ICE spokesman.

Per ICE, six people at Pine Prairie had a confirmed or likely case of mumps before Jan. 15; seven cases were reported between Jan. 15 and Jan. 30; and five were reported in February.

The Centers for Disease Control and Prevention also did not respond to requests for data regarding mumps cases nationally at ICE centers. Pine Prairie redirected requests for comment to ICE.

Detention center officials told lawyers from the Southern Poverty Law Center that the dorm lockdown was aimed at preventing the spread of mumps, which has an incubation period of 12 to 25 days. The restriction applied to detainees who may have been exposed to the virus as well as people who had confirmed infections, said attorneys. If new cases emerge in a quarantined dorm, the lockdown clock starts over.

“We were locked in our bunkers — before, they would take us out to the dining hall, but due to the quarantine, they brought us food in disposable plates,” reads a legal declaration from Christian Alexander Mejia Martinez, one Pine Prairie detainee.

The inability to go to the law library is critical because the majority of detainees don’t have legal representation. Such libraries are their main source for forms, translations and paperwork necessary for detention proceedings.

The Southern Poverty Law Center said it was blocked from seeing at least 17 detained immigrants during the two-week period. Homero Lopez, another lawyer working with detained people, said at least 17 of his clients were quarantined as well.

Lopez, who heads ISLA, a group that gives immigrants at Pine Prairie free legal help, learned of the problem when a client could not attend a legal hearing.

“He wasn’t infected, but was in one of the dorms where someone was,” so he was quarantined, Lopez said.

The detainees had “zero access to resources to prepare for court,” said Trostle, who is working with clients at Pine Prairie. Attorneys were unable to consult with quarantined people — both when it came to taking on potential new cases and for meeting with existing clients.

ICE did not comment on visitation or legal proceedings. “Each facility is responsible for its visitation protocols for detainees exposed to infectious organisms,” the spokesman said.

ICE’s health service unit provided Pine Prairie with a reference guide for handling quarantines, according to the agency. But individual facilities are given the freedom to design their own protocols, the spokesman added. (That said, the system attorneys described at Pine Prairie does reflect the standards put forth by ICE’s medical division, though ICE recommends isolating someone confirmed to have the disease.)

Quarantined people are now able to see attorneys but still cannot leave their dorms to use the law library, she said. Attorneys are now able to video conference with clients, or visit those who aren’t infected, as long as they wear gloves and masks.

The Department of Justice tracks all immigration court proceedings and verdicts, but a spokeswoman said the February data for the Oakdale Immigration Court, which is where the cases are heard, had not yet been processed. Trostle said the speed with which cases at Pine Prairie are processed is evidence that most quarantined people likely went through at least some portion of immigration proceedings without legal aid.

On average, a detained person spends about a month in an ICE facility while undergoing legal proceedings, according to ICE.

Legal aid — and particularly the law library — are of vital help to detainees, attorneys said. According to ISLA data, more than 80 percent of detainees in the Oakdale Immigration Court had no legal representation during fiscal year 2018, running from October through September. That means the law library is often their only resource in crafting a defense, or simply providing the appropriate paperwork to stave off immediate deportation.

Legal representation makes a significant difference, too. Of the 89 percent of detainees Oakdale’s court ordered removed, 7.4 percent had representation, according to the data, derived from Syracuse University’s Transactional Records Access Clearinghouse, which gathers information from federal agencies under the Freedom of Information Act. Conversely, more than half of the detainees who voluntarily leave, get permanent relief or are released from custody have legal representation, according to those statistics.

Those with attorneys were generally able to get their hearings postponed, but those without were less likely to do so, said Lopez. Advocates and lawyers say they still have trouble at times when trying to meet with clients. And cases that went forward during the two-week period, without a lawyer involved, are harder to take up after the fact.

The outbreak is one of several at detention centers nationally. In the past year, ICE confirmed, 51 of its facilities have reported investigations into mumps, chicken pox and the flu.

In the general U.S. population, the incidence of mumps nationally remains low, with most of the cases in recent years occurring in close groups, such as sports teams, or people in schools, colleges or camps, according to the CDC. While there is not a federal requirement to report cases, many state and local health departments do track the virus. The CDC listed 58 cases in 18 states from Jan. 1 to Jan. 31. Louisiana’s health department referred all questions to ICE and the CDC.

The classic symptom of mumps is swelling along the jaw line, but not every patient shows symptoms. (Death from mumps is very rare; complications are more likely in adults than children.)

To get infected, a person generally has to be in close contact — within a few feet — unlike the measles virus, which is more easily spread over a wider area, said Dr. Matthew Zahn, chair of the public health committee for the Infectious Disease Society of America.

With any outbreak, “you try to isolate the people with the illness,” said Zahn, who was not involved with the Louisiana detention center outbreak.

Still, that can be complex. In a setting like a college dorm, prison or detention center, if only a small number of people are exposed to the ill person, isolating the patient and those few is “much more logistically simple,” than if larger numbers are involved.

This entry was posted in Homepage Feature, Immigration, Health. Bookmark the permalink.