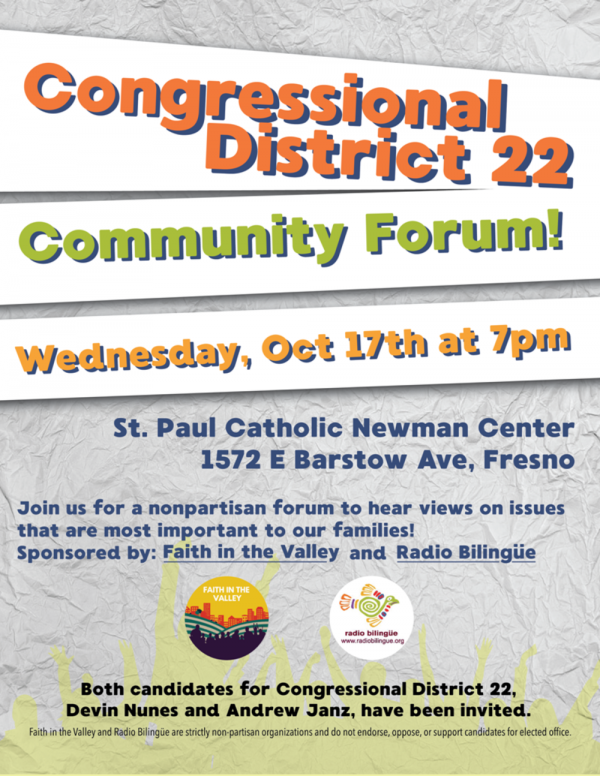 The public is invited to an Oct. 17 Fresno town hall forum on pressing issues facing Congressional District 22, the hotly contested district that has become a major battleground in the national fight for control of the United States Congress in the November 6, 2018 mid-term elections. Republican incumbent Devin Nunes is being challenged by Democrat Andrew Janz in this California San Joaquin Valley district that covers areas of Fresno and Tulare Counties and is now majority people of color. Janz is confirmed while to date Nunes has not responded to repeated invitations to participate in the forum being hosted by the Fresno-based Radio Bilingüe Latino Public Radio Network and Faith in the Valley community organization in California’s Central Valley.

The town hall is scheduled for:

Local residents are invited to gather at the forum and share their questions, testimonies and opinions on urgent issues for Congressional District 22, such as access to health care and higher education, immigration, poverty, jobs, air and water quality, and the escalating political divide across the Valley and nation.   The town hall will be co-moderated by representatives of Faith in the Valley and Radio Bilingüe, and feature questions from selected community panelists and members from the live audience.

This special program in English is part of the “Hacia el Voto 2018 –Elections 2018″ series, an election and civic-participation news tradition on Radio Bilingüe. The tape-delayed broadcast of the forum on Oct. 18 will air at 5 PM PDT on Radio Bilingüe’s three full-power stations in the San Joaquin Valley – 91.5 KSJV Fresno, KMPO 88.7 Modesto-Stockton and KTQX 90.1 Bakersfield  – as well as an additional 75 stations affiliated with the Latino public radio network around the country. The program will also be distributed via webcast, podcast, and audio on demand.