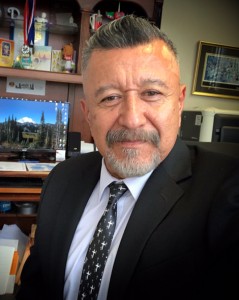 As the Executive Director at the Hispanic Commission Domingo Zapata oversees a small $1.5 million dollar operation with the largest DUI program in Fresno County providing services in urban and rural areas, along with an adult (18yr.+) Men’s Spanish Speaking 90-day Residential facility “Nuestra Casa Recovery Home.”  Both programs are licensed and certified by the Department of Health Care Services (DHCS) in Sacramento to provide Alcohol and Drug Counseling services. Zapata has over 36 years of experience in substance use disorders (SUD) prevention and treatment with youth and adult populations in Fresno County. Zapata joined the Fresno County Hispanic Commission on Alcohol & Drug Abuse Services, Inc. in 1983, as an Attendant at a Spanish speaking residential facility Nuestra Casa Recovery Home, and in 1984 began conducting Alcohol and Drug Education (DUI) classes in the rural areas of Fresno County for over 13 years, and in July of 1997 he accepted the position of Executive Director for the 501 © (3) nonprofit corporation governed by a nine (9) member Board of Directors located at 1803 Broadway Street, Fresno, CA 93721.

Prior to that Zapata was a Health Educator position (from 1990-1997) in charge of planning, implementation, and quality assurance of the Community Tobacco Control Program (Tobacco Tax Initiative-Prop 99) with United Health Centers of the San Joaquin Valley Inc (UHC). In 1994-1997 Zapata took on a new challenge as Regional Coordinator in the implementation and development of the California Agricultural Safety and Health Education Training Project (Cal ASET funded by the W.K. Kellogg Foundation), to reduce injuries and illnesses on California farms. As Coordinator of the CalASET project he provided Health and Safety Education to Farmworkers and their families, farmers and families, as well as the provision of continuing education conferences for clinicians to identify and diagnose injuries and illnesses on California farms.

ASSOCIATIONS
Mr. Zapata has served on the Board of Directors for the California Association of DUI Treatment Programs (CADTP) since 2014, a non-profit organization formed as a partner to its Member Organizations to promote understanding and to protect the integrity of the California DUI Programs through advocacy, education and collaboration with Legislators, State and County officials and other community stakeholders. CADTP was formed as an association in 1986 and incorporated in 1988. CADTP is self-supported through membership dues, association activities, and contributions.

Zapata has also been a part of Radio Bilingüe Inc. since 1980, first as an Announcer and later on the Board of Director effective May 5th 1981. Radio Bilingüe is the leading Latino public radio network and content producer for the nation’s public broadcasting system.  Its mission is to serve as a voice to empower Latinos and other under-served communities.

ACADEMICS
Zapata developed curriculums for Health and Safety courses instructed in both Spanish and English, in topics of: Alcohol and Drug Education, Tobacco Cessation, Heat Stress, Tractor Safety, Pesticide Safety, CPR & First Aid. Zapata graduated from Fresno City College with an Associate of Arts in Liberal Arts in 1982 and then transferred to California State University Fresno to complete a Bachelor of Arts in Spanish Literature.